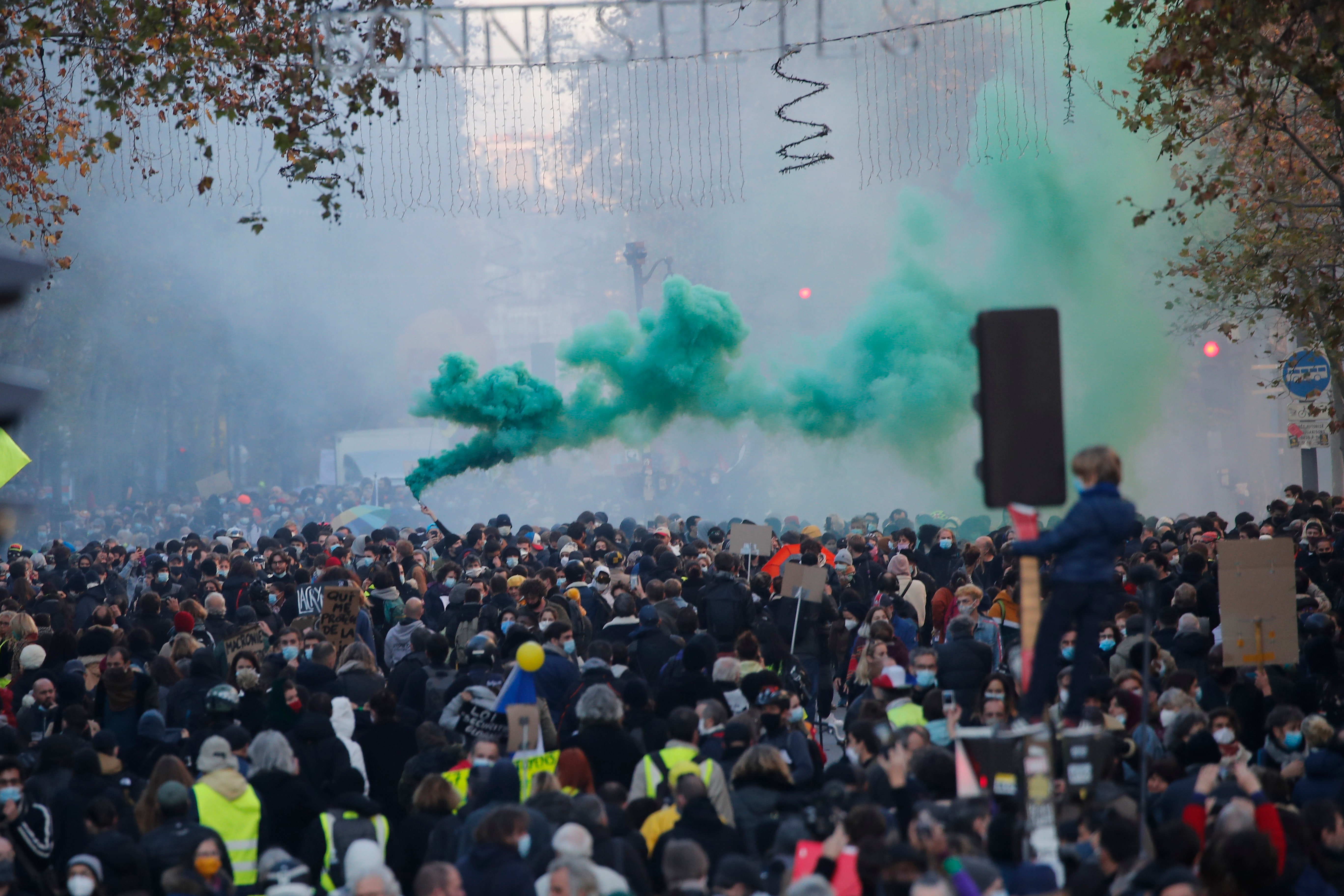 PARIS – Tens of thousands of critics of a proposed security law that would restrict the filming of police officers protested across France on Saturday, and officers in Paris who were advised to behave responsibly during the demonstrations repeatedly fired tear gas to disperse rowdy protesters who set fire to France’s central bank and threw paving stones.

The mood was largely peaceful, however, as dozens of rallies took place against a provision of the law that would make it a crime to publish photos or video of on-duty police officers with the intent of harming their “physical or psychological integrity.”

Civil liberties groups, journalists, and people who have faced police abuse are concerned that the measure will stymie press freedoms and allow police brutality to go undiscovered and unpunished.

“We have to broaden the debate, and by doing that, we say that if there were no police violence, we wouldn’t have to film violent policemen,” Assa Traore, a prominent anti-brutality activist whose brother died in police custody in 2016, told The Associated Press.

Violence erupted near the end of the march as small groups of protesters pelted riot police with small rocks and paving stone. The officers retaliated with volleys of tear gas, prompting minor scuffles. Rioters then set fire to the facade of the central bank and to police barricades; in the melee fire trucks struggled to reach the site.

Macron’s government says the law is needed to protect police amid threats and attacks by a violent fringe.

But the chief editor of French newspaper Le Monde, Luc Bronner, argued at the protest that the law against publishing images of officers is unnecessary.

“There are already laws that exist to protect civil servants, including police forces when they’re targeted, and it’s legitimate – the police do a very important job,” Bronner said. “But that’s not what this is about. It’s about limiting the capacity of citizens and along with them, journalists, to document police violence when they happen.”

While journalists have been the most outspoken over the security bill, it could have an even greater impact on the efforts of non-journalists who film police during aggressive arrests, notably minorities who can try to fight police abuse and discrimination with a few seconds of cellphone video.

“There were all those protests in the summer against police violence, and this law shows the government didn’t hear us… It’s the impunity. That’s what makes us so angry,” protest participant Kenza Berkane, 26, said.

Berkane, who is French and of North African origin, described being repeatedly stopped by police for identity checks in the metro or while going to school. while white friends were allowed to pass. “We ask ourselves, when will this stop?”

The cause has gained renewed importance in recent days after footage emerged of French police officers beating up a Black man, triggering a nationwide outcry.

Macron spoke out against the video images on Friday, saying “they shame us.”

Video that surfaced Thursday showed the beating of music producer Michel Zecler, following footage of the brutal police evacuation Tuesday of migrants in a Paris plaza. The officers involved in the beating of Zecler were suspended pending an internal police investigation.

An internal letter from Paris Police Prefect Didier Lallement called on officers to use “probity, the sense of honor and ethics” when policing Saturday’s protests, which were authorized by authorities despite France’s partial virus lockdown.

Through most of the march police hung back, chatting while holding their helmets or watching silently as protesters shouted “Shame!” at them.

The crowd was overwhelmingly peaceful, but some in the unruly minority came equipped with gas masks and helmets.

Article 24 of the proposed security law criminalizes the publishing of images of police officers with the intent of causing harm. Anyone found guilty could be sentenced to up to a year in jail, and fined 45,000 euros ($53,000).

Many protesters, police and journalists have been injured during protests in recent years, including several Associated Press journalists.

Prime Minister Jean Castex announced Friday that he would appoint a commission to redraft Article 24, but he backtracked after hearing from angry lawmakers. The commission is now expected to make new proposals by early next year on the relationship between the media and police.