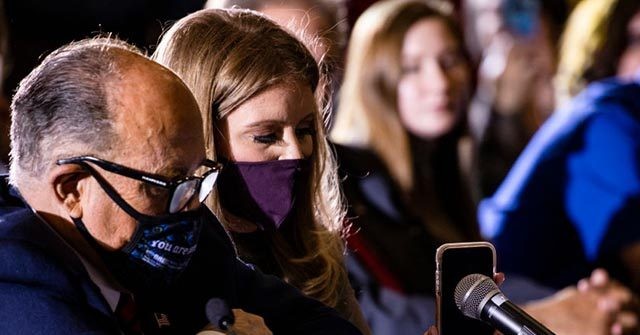 “Arizona State Legislature to hold hearing on election integrity Monday, November 30. Mayor @RudyGiuliani and I will be present on behalf of President @realDonaldTrump,” she announced, providing a link detailing the event:

🚨🚨🚨Arizona State Legislature to hold hearing on election integrity Monday, November 30. Mayor @RudyGiuliani and I will be present on behalf of President @realDonaldTrump.
https://t.co/b8ORVzEakP

“The President’s legal team will be present from DC to assist in a fact finding hearing with select members of the Arizona House and Senate and a panel of experts,” a description of the event reads.

“The goal will be to gather the evidence that justifies calling a special session to contemplate what happened and take immediate action accordingly,” it adds:

State Legislatures are uniquely qualified and positioned to hold hearings on election irregularities and fraud before electors are chosen. As established in Article 2, Section 1.2 of the United States Constitution, State Legislatures have the sole authority to select their representatives to the Electoral College, providing a critical safeguard against voter fraud and election manipulation.

However, a formal “hearing” has not been approved by either chamber. Arizona Senate’s director of communications Mike Philipsen clarified the nature of the meeting in a statement to the Washington Examiner.

“There is no sanctioned hearing at the Senate or House,” Philipsen said. “My understanding is a House member has set up a meeting at a local hotel to discuss possible irregularities in the election.”

He  said in part:

After a review of the statistical anomalies, and there are to numbers [sic] to count, affidavits of improper actions, and community outrage that has grown out of what appears to voters to be an attempt to throw the election through a number of fraudulent efforts, we decided as a Members [sic] of the Legislature, and not as members of any specific committee, that we should move forward with a public hearing.

The meeting comes on the heels of an Arizona judge dismissing a lawsuit lodged by the Arizona Republican Party, which called for a hand count audit of the votes in Maricopa County based on precinct rather than by voting centers, as the former vastly outnumbers the latter:

Our response to today’s order by Judge Hannah rejecting our request for a legal hand-count audit at the precinct level: pic.twitter.com/1cq9phV1Yh

Biden leads Trump in Arizona by fewer than 10,500 votes.