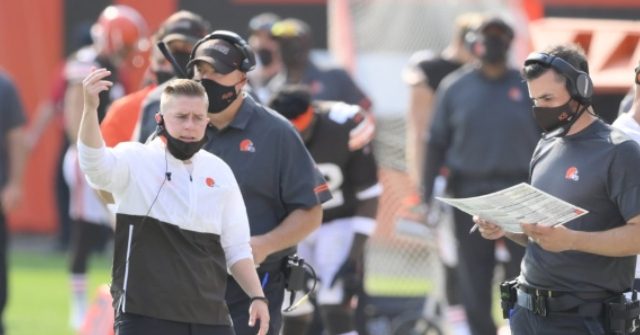 CLEVELAND (AP) — Browns chief of staff Callie Brownson will handle game-day duties for Cleveland’s tight ends on Sunday in Jacksonville, a first in team history for a female.

Brownson, who was hired by Browns coach Kevin Stefanski shortly after he came to Cleveland earlier this year, will fill in for coach Drew Petzing. He did not travel to Florida with the team after his wife, Louisa, gave birth to the couple’s first child on Saturday.

Brownson is one of a handful of female coaches currently working in the NFL. Her normal duties stretch across Cleveland’s entire coaching staff.

Earlier this week, Stefanski, who broke in with Minnesota in a role similar to Brownson’s, praised her ability to juggle an ever-changing schedule this week because of COVID-19 issues. The team had to close its facility three times due to players testing positive.

“That is our job to adjust as coaches and to see who is available to us and put a game plan together to go win,” Stefanski said Wednesday. “I have some really, really good coaches working with me. On a day like this when you are trying to get the schedule and you are trying to add extra meetings, Callie is putting everything together for us. She is the star of the day and able to put that together.

“That is where I am lucky to have really good coaches around me.”

Brownson made history earlier this season when Cleveland’s game in Washington featured a female coach for both teams and a female official.

Brownson was a full-time coaching intern with Buffalo last season. She also worked as a scouting intern with the New York Jets before joining Dartmouth’s coaching staff in 2018.