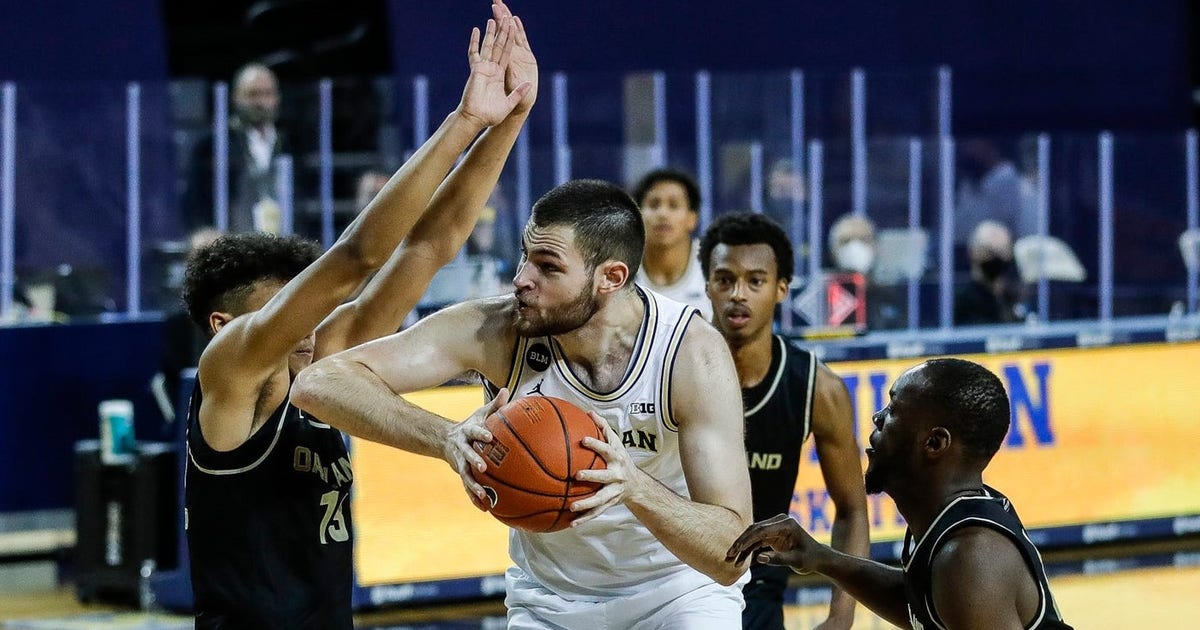 Dickinson had all 19 of his points after halftime, helping the Wolverines outlast Oakland 81-71 in overtime Sunday night.

The 7-foot-1 freshman center scored six points early in overtime to finally give Michigan control of a game it was expected to win easily.

“My teammates just kept looking for me and I just kept trying to deliver,” Dickinson said.

Isaiah Livers scored 22 points for the Wolverines (2-0), but he said Dickinson became the go-to player of the night.

“He wanted that ball and we made an emphasis to get the ball into Hunter,” he said. “And, he’s a good free throw shooter so that’s a plus.”

Michigan led by eight points in the first half, but was behind 33-31 at halftime. The Wolverines trailed by as much as six in the second half as part of an uneven and sloppy performance marred by 20 turnovers.

“I’m not going to lie, it was definitely scary being down,” freshman Terrance Williams said.

The Golden Grizzlies (0-4) had a chance for the third victory over a ranked team in program history and the first in a decade, but appeared to run out of energy playing in their fourth game in five days.

“We did a good job until we got tired,” coach Greg Kampe said. “We’ve had just four practices since the end of October because we had nine players and two coaches, including myself, test positive for COVID.”

Jalen Moore led Oakland with 21 points, and Trey Townsend had 13.

The Wolverines had a shot to win in regulation, but struggled to get a good shot against a zone defense that gave them trouble all night.

Michigan had the ball with 26.8 seconds left after a timeout and Dickinson was left to force a jumper just before the buzzer and the game was 67-all going into overtime.

Oakland: The Horizon League team from suburban Detroit can build confidence off its showing against a ranked and rested team.

“We wanted to win so this isn’t good enough,” Kampe said. “We’ve gone to overtime four times against Power Five teams and lost them all so this doesn’t feel good.”

Michigan: Cutting down turnovers will be a point of emphasis in practice. The Wolverines gave up the ball 15 times in the first half and finished regulation with 20 against an active zone.

“Oakland’s defense bothered us,” coach Juwan Howard acknowledged. “We only had five turnovers in the second half and overtime, but we cannot have when were giving our opponents 15 extra possessions in the first half and finish with 20 extra possessions.”

Late in the first half, TV cameras captured Howard and Livers yelling at each other during a timeout.

“It was a nice little spark plug that he needed,” Howard said. “It’s great that I get an opportunity to empower young men to be the best version of themselves.”

Livers recalled Howard telling him to play harder and to get on the ground for loose balls.

“He was holding me accountable,” Livers said. “He was challenging me. That’s how we communicate We argue in practice and go it during games.”

Michigan, which beat Bowling Green 96-82, might slip out of the Top 25 with its lackluster effort against Oakland.

Oakland plays its fifth game in a week at Purdue (1-1) on Tuesday.