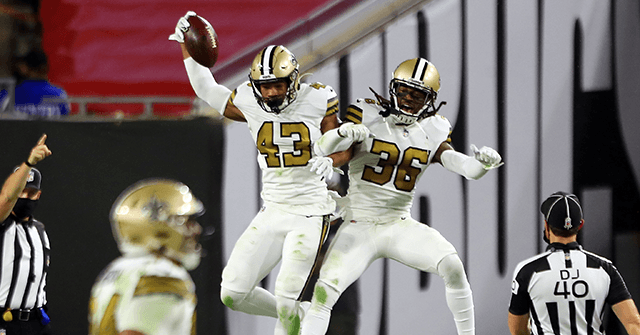 Sources inside the NFL reportedly told ESPN that the league fined the New Orleans Saints $500,000 and a seventh-round draft pick after locker room videos surfaced of the team celebrating their 38-3 victory over Tampa Bay without wearing masks.

The Saints are being fined $500K and losing a 7th-round pick for their mask-less celebrations after beating the Bucs in Week 9, per @AdamSchefterpic.twitter.com/KdygzOVzE3

A Nov. 3 memo from the NFL contained new coronavirus protocols which stressed: “All players and staff must wear masks or double-layered gaiters in the locker room on game day — prior to the game, during halftime, and post-game.”

A league source told ESPN that “the video or the dancing itself wasn’t the issue,” but that “it was actions in the video with unmasked players in the locker room after the game” that triggered the fines. According to the source, the Saints have had previous violations, and the league has warned the team that “further actions would result in escalated discipline.”

The Saints have appealed the NFL’s ruling and cited their belief that other teams have celebrated in the same manner, but have not been penalized as harshly.

The NFL similarly penalized other teams this season for violating league coronavirus protocols. The league fined the Las Vegas Raiders $500,000 and a sixth-round pick, and additionally fined coach Jon Gruden $150,000 for coronavirus violations. The New England Patriots were fined $350,000 related to positive coronavirus results for quarterback Can Newton and others.