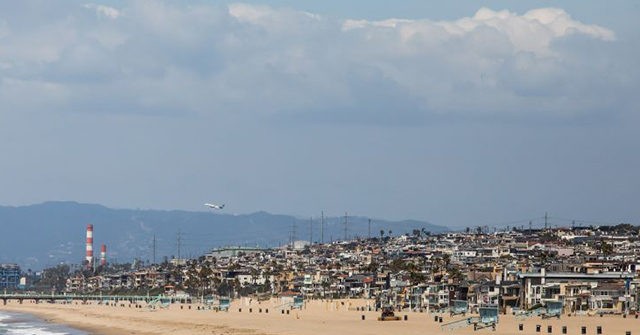 The incident took place at Seventh Street and Hermosa Avenue around five p.m. and halted all southbound traffic for quite a while, according to CBS Los Angeles.

“Eyewitnesses tell us while they were stopped at an intersection — with both cars taking up the two lanes on the one-way road — a third car (possibly a Mustang) pulled up behind them and that driver started jawboning at the MAGA convertible,” TMZ reported.

Moments later, the Mustang’s driver got back in his vehicle and appeared to follow the Jeep through the intersection.

However, when the Mustang tried to change lanes and pull up alongside the Jeep that also appeared to be moving over, it clipped a row of parked cars and flipped on its side.

The person recording the video screamed “Oh my God! Oh my God!” then began running toward the scene of the crash with another bystander.

“So, we came outside; we walked down the street and, lo and behold, there’s a car flipped over. So, the thing about Hermosa Avenue is that there’s not many street lights, or street signs, so a lot of people speed,” a witness told CBS Los Angeles:

A child was reportedly inside one of the vehicles involved but no one was seriously hurt, the outlet said.

Police officers quickly responded to the scene and witnesses claimed several bystanders also jumped into action to help, according to the TMZ article.

The outlet posted a photo of the crash that showed the toppled car in the middle of the road as firefighters assessed the damage.

Hermosa Beach police officers told CBS Los Angeles that traffic started moving again around 6:30 p.m., adding that, so far, no arrests have been made.