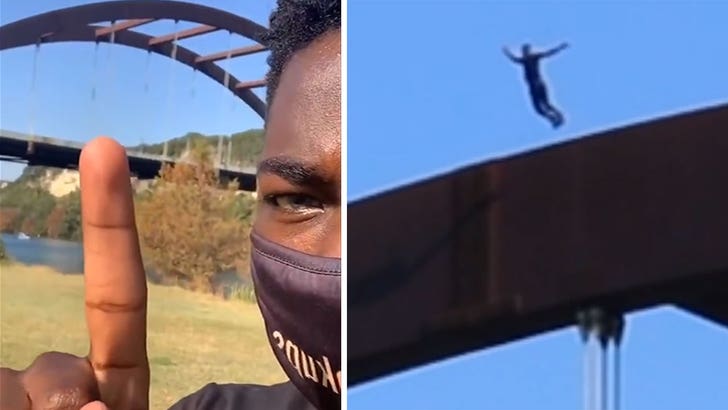 This is INSANE … a YouTuber decided it was a good idea to scale a bridge and then jump from the very top … and it did NOT go well.

Saa Fomba told his fans his goal was to chase his dreams and “leave a mark.” Well, leave a mark is what he did, as he hit the water with thunderous force.

He climbed the Pennybacker Bridge … high above the Colorado River. You see him, on the top of the bridge, throw his fists up in the air as he waited for a boat with rescuers to show. Once it did, he made the leap and got fully submerged. A few seconds later, he reappears.

Apparently, the rescuers realized Fomba was hurt and call EMT’s.  Fomba says he suffered a fractured skull and was taken to the hospital for treatment.

Fomba’s video caption reads, “You might see it as jumping for views, but I see more. I wasn’t built for just normal, I’m a dream chaser, I don’t settle for less, I will leave my mark on this planet we call earth our home. chase yours and leave your mark.”

Hope it was worth it.