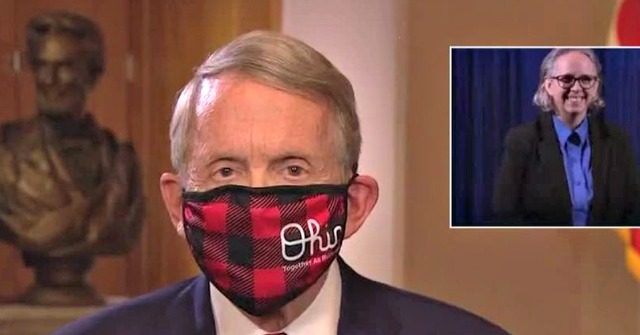 A total of 12 articles of impeachment have officially been filed against Ohio Governor Mike DeWine over abuse of power during the Chinese coronavirus pandemic.

“Governor DeWine’s mismanagement, malfeasance, misfeasance, abuse of power, and other crimes include, but are not limited to, meddling in the conduct of a presidential primary election, arbitrarily closing and placing curfews on certain businesses, while allowing other businesses to remain open,” said Rep. Becker’s office in a statement.

“He weaponized the Ohio Bureau of Workers’ Compensation to bully and harass businesses and the people; to enforce a statewide mask mandate and other controversial measures of dubious ‘value,’ making Ohio a hostile work environment,” the statement added.

The statement goes on to cite the governor’s inclusion of places of worship during shutdown orders, as well as the implementation a statewide mask mandate, which has been in effect in one way or another since the summer.

“Rather than hearing the cries of Ohioans, Governor DeWine continues to stifle those cries by finding more inventive ways to use masks to muffle the voices of the people,” said Rep. Becker in his statement.

“He continues to have callous disregard for the fact that his isolation policies have led to a shockingly high number of suicides, alarming rates of drug abuse, persistently high unemployment, and the forced abandonment of the elderly by their loved ones,” the representative added.

Becker first announced his decision to file articles of impeachment against DeWine in August, citing the same issues.

According to Ohio’s Constitution, the State House of Representatives has the sole power of impeachment, but a majority of members are needed in order for impeachment to concur. It would then go to the State Senate, with a two-thirds vote needed to convict a governor of impeachment.