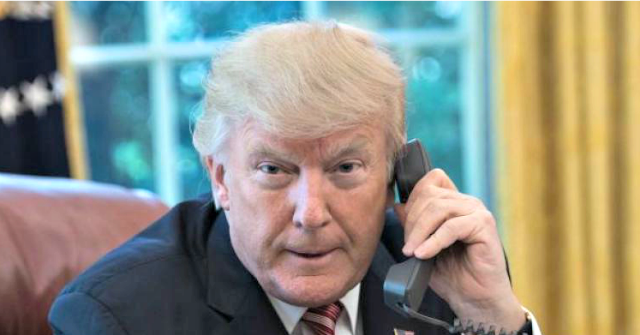 President Donald Trump called in to a hearing with Republican lawmakers in Arizona Monday, praising them for fighting back against Democrat election fraud.

“What they did is they played game, and games like nobody has ever seen before,” Trump said, referring to the Democrats. “This is the first time that Republicans or the first time anyone has fought back.”

The audience applauded and cheered when they heard the president’s voice, as his attorney Jenna Ellis held the phone to a microphone.

The president claimed that he won the swing states of Arizona, Michigan, Georgia, Pennsylvania, and Wisconsin, reminding supporters that he earned 11 million more votes than he did in 2016.

“I’ve been watching the hearings and they’re fascinating, incredible,” he said.

The president praised all of the in-person witnesses who noted voting and counting anomalies in the state, where Biden finished with a lead over Trump of 10,457 votes.

“I know some get heat, but many more get praise from the American public,” Trump said.

Trump appeared furious that Arizona certified the election results on Monday as the Republican hearing about fraud was taking place. He accused Republican Gov. Doug Ducey of rushing the certification process, despite questions about the election’s integrity.

“On top of it, you have a governor named Ducey,” he said as the crowd booed. “He just rushed to sign certificates … what’s that all about? He didn’t have to sign it. I say, why would he sign when you have these incredible hearings going on that’s showing such corruption and such horrible fraud?”

The audience applauded in agreement.

“You have to figure out what that’s all about with Ducey. He couldn’t go fast enough,” Trump said, He added, “We’re not going to forget what Ducey just did.”

The president repeated allegations of voters who arrived to cast their ballot to find out it was already filled out, people paid to vote, and mail-in ballots that were processed without Republican election observers.

“This shows how arrogant the Democrats and others were in taking away and stealing an election,” he said.

Trump noted that he also faced criticism for fighting for voter integrity, noting that people repeatedly urged him to choose the “easier route” and focus on 2024.

“I said, ‘No,’” he recalled. “I have to focus on two weeks ago. This is the greatest scam ever perpetrated on our country.”

The president praised Arizona Republicans for holding the hearing, despite widespread criticism from corporate media.

“We admire all of the people, and that includes all of these representatives that are up there and doing a great job,” Trump said. “What they don’t realize is that they might hear some things, but they’re becoming legend for taking this on.”

The president again praised Rudy Giuliani for having the courage to fight when other lawyers backed down.

“This is the most important thing that you’ve ever done,” he said.