The Pittsburgh Steelers and Baltimore Ravens matchup that was rescheduled for Wednesday was bumped up to the afternoon because there were major priorities happening in primetime.

The Steelers and Ravens will play the final Week 12 game at 3:40 p.m. ET if everything goes according to plan. ESPN reported that the game couldn’t have been played in primetime because NBC is airing the Rockefeller Christmas Tree Lighting in New York City at night.

It appeared to be another snag in the already chaotic rescheduling of the game, which was originally set to be played on Thanksgiving Day, moved to Tuesday night and then to Wednesday because of both teams’ issues with the coronavirus. 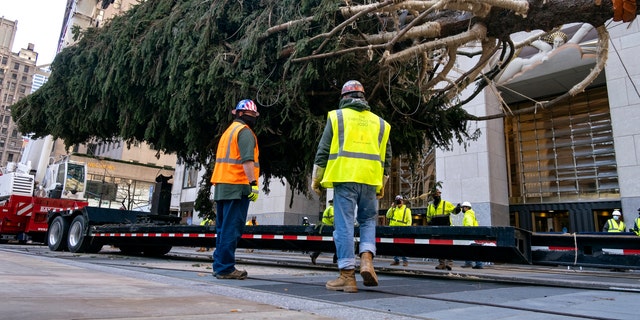 The 2020 Rockefeller Center Christmas tree, a 75-foot tall Norway Spruce that was acquired in Oneonta, N.Y., is prepared for setting on a platform at Rockefeller Center Saturday, Nov. 14, 2020, in New York. (AP Photo/Craig Ruttle)

“These decisions were made out of an abundance of caution to ensure the health and safety of players, coaches and game day personnel and in consultation with medical experts,” the league said in a statement Monday.

JUJU SMITH-SCHUSTER, MARLON HUMPHREY HAVE AN IDEA ON HOW TO PLAY STEELERS-RAVENS GAME

Baltimore said in a statement that the team held a walkthrough at their facility. They did not enter the locker room or the training room. The team will travel to Pittsburgh on Tuesday.

The Ravens had two more members of their team test positive for COVID-19 on Saturday, including Pro Bowl tight end and Type 1 diabetic Mark Andrews, ESPN reported on Sunday. That brought the team’s total to at least 11 players and 10 staff members who have recently contracted the virus. Twenty players total have been added to the reserve/COVID list in recent days.

The Steelers have been dealing with COVID problems as well. Running back James Conner was among the Steelers personnel who tested positive for the virus.