A comedian from New York is catching a lot of heat for an unsavory cooking tutorial he recorded in an airplane restroom.

The man, identified as Marcus Monroe, had recently shared footage of himself “grilling” a steak over a fire he started in the toilet of what appeared to be a Delta aircraft bathroom, and then taking the steak back to his seat to enjoy on the flight.

“They don’t have hot meals anymore on airplanes so… I come up with a solution,” he reportedly wrote in the caption of the now-deleted video, according to the International Business Times. 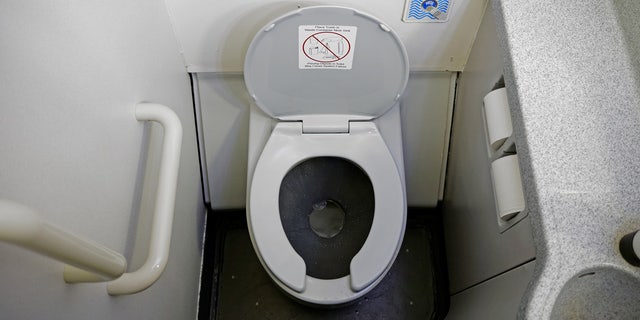 Some might see an airplane toilet. One TikTok user, however, saw a grill waiting to be fired up. (iStock)

In addition to removing the video, Monroe has since claimed that the entire thing was staged. (Third-party social media users have since re-uploaded the clip, which appears to show that the fire element seen inside the toilet was indeed an illusion.) He has also apologized for any confusion his prank may have caused.

Monroe did not immediately respond to requests for comment.

Real or not, the video has elicited strong responses from social media users, with some rebuking Monroe for (appearing to) skirt FAA fire regulations. Most, however, were just grossed out by the TikTokker’s toilet-charred in-flight meal.

The video also caught the eye of Southwest Airlines, who reportedly retweeted a Twitter post containing the footage.

“We— We have no words. Other than please don’t even think about cooking a steak on one of our flights,” Southwest wrote in the caption, as first reported by flight blog Johnny Jet.

Southwest also appeared to delete this tweet shortly after posting it, although evidence of their remarks still exists on the platform, along with a response Southwest gave to a follower.

A representative for Delta Air Lines did not immediately return a request for comment.

Funnily enough, this isn’t the first time Monroe has grabbed headlines with a “prank” he claims to have pulled on a flight. Earlier in November, the comedian uploaded footage of himself appearing to cut a woman’s hair that blocked his in-flight TV screen. But this prank, too, was revealed to be staged, Monroe admitted in the comments, per The Sun.