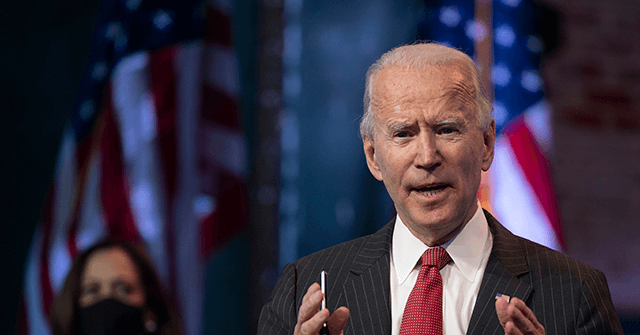 Joe Biden is signaling his support for the federal government bailing out cities and states impacted economically by the novel coronavirus pandemic.

Biden, who has been declared president-elect by many media outlets, made the comments when introducing members of his White House economic team on Tuesday in Wilmington, Delaware. During the event, Biden discussed the need for the federal government to “deliver immediate relief” to citizens being forced to choose between “work and family” in the face of the virus.

One way to ensure such relief, according to the former vice president, was for the federal government to send more money to cities and states that have seen their revenue streams dry up, while expenses have soared amid the coronavirus.

“You know there’s an urgent need to fund state and cities,” Biden said. “So the frontline workers on those jobs can stay on those jobs.”

“You know the founders were pretty smart. … There’s a reason why all the states and localities have to have a balanced budget, but we’re allowed, federally, to run a deficit in order to deal with crisis and emergencies, as we have in the past,” Biden added.

Arguing that it was important to keep “vital public services running,” especially at the local level where such services meant “law enforcement, firefighters, [and] educators,” Biden urged congress to pass a “robust package for relief” before the inauguration.

“But any package, passed in a lame-duck session, is likely to be at best just a start,” Biden said. “My transition team is already working on what I’ll put forward in the next Congress to address the multiple crises we’re facing.”

Since the onset of the coronavirus pandemic a number of state and local governments, especially states where the virus has been most rampant, have been forced to shut down their economies and expand public health spending. As such, revenue projections have shrunk for most states, while unemployment has soared.

The overall result is that states and cities, most of which are prohibited from running deficits by law, are expected to face budget shortfalls in the coming years. In California, for instance, economic analysts estimate the state will face a $17 billion deficit by 2025.

So far, Congress has been divided on whether to include state and local bailouts in the ongoing coronavirus relief talks. House Speaker Nancy Pelosi (D-CA) and Democrats have backed a $2.2 trillion package that includes more than $436 billion in relief for states and cities.

Republicans, on the other hand, favor a smaller and more targeted $500 billion spending proposal that prioritizes funding for small businesses. Senate Majority Leader Mitch McConnell (R-KY), in particular, has lambasted the idea of sending more money to state and local governments, arguing in the past that it would amount to nothing more than a “blue state bailout.”

“I think this whole business of additional assistance for state and local governments needs to be thoroughly evaluated,” the Senate leader said in April, noting that most states facing budgetary shortfalls did so because of prior non-coronavirus spending.

“There’s not going to be any desire on the Republican side to bail out state pensions by borrowing money from future generations,” McConnell added at the time.