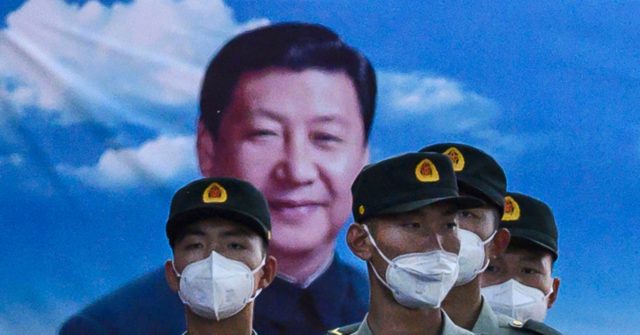 As Breitbart News reported, Australian Prime Minister Scott Morrison has demanded Beijing apologize after a top CCP official posted an obviously contrived image on Twitter depicting an Australian soldier with his knife to a child’s throat, appearing to prepare to behead the victim.

Morrison described the post by the official Twitter account of Chinese foreign ministry spokesman Zhao Lijian as an “outrageous and disgusting slur” at a virtual news conference in Canberra on Monday.

Shocked by murder of Afghan civilians & prisoners by Australian soldiers. We strongly condemn such acts, &call for holding them accountable. pic.twitter.com/GYOaucoL5D

AFP reports Twitter said it had since marked the tweet as “sensitive,” but added comments on topical political issues or “foreign policy sabre-rattling” by official government accounts were generally not in violation of its rules.

Twitter is banned for most citizens in China and Beijing has for decades been accused of widespread human rights abuses.

Some Australian allies expressed concern over the tweet, including New Zealand Prime Minister Jacinda Ardern, with the support coming as Australia looks to strengthen its alliances in the Indo/Pacific region as a guard against Beijing’s increasingly strident diplomacy.

Australia will join Japan in a regional defense pact designed to bolster their standing against Beijing’s growing military power and assertiveness in the Indo-Pacific region. https://t.co/ZYhlX6LwSA

“In this case an image has been used that is not factually correct, that is not a genuine image, so we have raised that directly with Chinese authorities,” she told reporters.

The French foreign affairs ministry said the post was “unworthy of the diplomatic standards we have the right to expect from a country like China”.

A spokesperson for the Chinese embassy in Canberra dismissed the criticism, instead accusing Australia of making too much of the incident.

“The rage and roar of some Australian politicians and media is nothing but misreading of and overreaction to Mr. Zhao’s tweet,” the spokesperson said.

The embassy suggested Australian officials were attempting to “deflect public attention from the horrible atrocities by certain Australian soldiers” and “stoke domestic nationalism.”

AFP contributed to this report