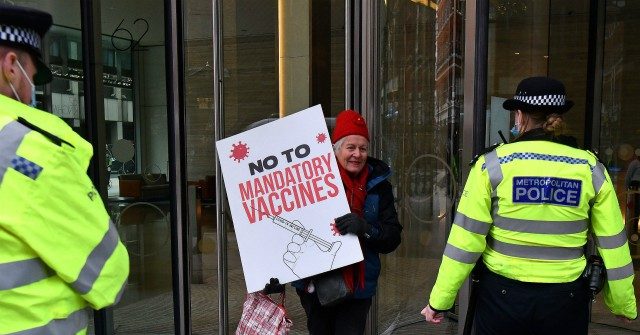 The UK’s new vaccine minister Nadim Zahawi has said that while coronavirus vaccinations will not be mandatory, Britons may be barred from going to the cinema or getting on an aeroplane without it if service providers demand proof of inoculation.

Conservative MP Nadim Zahawi is the newly-appointed Minister for COVID Vaccine Deployment and will oversee the rollout of the vaccination in England.

Mr Zahawi said that of the three vaccines currently being developed in the UK — by Oxford/AstraZeneca, Pfizer/BioNTech, and Moderna — the Pfizer product is the most far along and likely to be widely rolled out first.

Speaking to BBC Radio 4’s World at One on Monday, Mr Zahawi confirmed that the vaccine would not be compulsory and would remain voluntary.

However, the demand for “immunity passports” to secure service — such as by Australian airline Qantas — may make the jabs effectively compulsory by any other definition.

When host Sarah Montague asked if could follow that British businesses could demand an immunity passport before a person can go to a stadium to watch a football match, the COVID vaccination minister did not deny such an outcome, rather adding that the government was looking for a system comparable to the NHS’s ‘Test and Trace’ app, which tracks the spread of coronavirus.

Mr Zahawi said: “We are looking at the technology and of course a way of people informing their GP that they’ve been vaccinated.

“But also I think you’ll probably find that restaurants, bars, and cinemas and other venues — sports venues — will probably also use that system as they’ve done with the app.”

The Times had reported on Monday that the NHS is working on updating the Test and Trace app to include the information in its data architecture so that Britons can confirm their inoculation status.

The vaccine tsar admitted that without the availability of Big Government’s tech, there would be no demand for such ‘COVID passports’ by service providers, saying: “In many ways, the pressure from both ways: from service providers who will say, ‘Demonstrate to us that you’ve been vaccinated,’ but also we will make the technology as easy and accessible as possible.”

Sarah Montague asked Mr Zahawi whether or not it would become “virtually impossible to do anything if you don’t have the vaccine”, with the minister responding: “I think people have to make a decision, but I think you’ll probably find many service providers will want to engage in this in the way they did with the [Test and Trace] app.”

The minister’s comments come after reports that the government is also working on coronavirus stamps for passports in order to boost the travel and tourism industry. The government is also reportedly working on so-called “freedom passes” for those who have tested negative for the Chinese coronavirus, which could allow them to be free from having to wear a mask or to visit family members during lockdowns.

Former Brexit Party MEP, now Lady Fox of Buckley in the House of Lords, Claire Fox responded to Zahawi’s remarks on Monday evening, saying: “When Boris assured us that no-one would be forced to vaccinate, he forgot to add, ‘but if you don’t, you will be effectively prevented from being part of the public sphere, ever’. Public shaming next? I want to be an enthusiastic advocate for vaccines. This COERCION doesn’t help.”

UK Govt to Roll Out ‘Vaccine Stamps’ in Passports by Next Year: Report https://t.co/VoSLqMLVTn