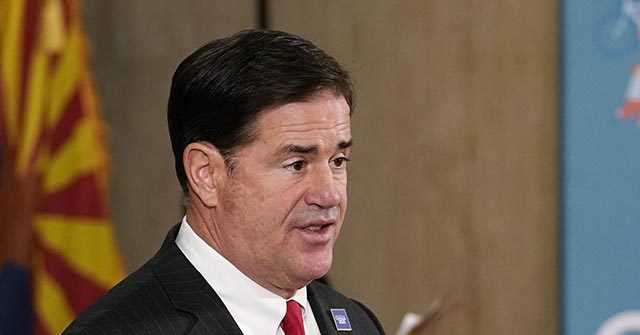 Arizona Gov. Doug Ducey appeared to decline a call from President Donald Trump on Monday as he was signing an election certification document.

Ducey was sitting in front of reporters, pen in hand, when his phone rang:

Watch the Governor of Arizona completely blow off Trump when he calls him in the middle of certifying Arizona’s election results for Joe Biden. pic.twitter.com/Ogv4AYaEwq

The ring tone, “Hail to the Chief,” could be heard as Ducey took the phone out of his jacket pocket. He appeared to look at the screen, decline the call, and place the phone screen-down on the table.

MSNBC noted Ducey previously said he changed Trump’s ring tone to the presidential song so he could more easily recognize his calls.

“I had to change the ring tone on my phone and it rings ‘Hail to the Chief’ because I didn’t want to miss another phone call directly from the White House,” Ducey said in early July.

Trump called into the hearing and blasted Ducey, accusing him of rushing the certification process, Breitbart News reported.

“On top of it, you have a governor named Ducey,” the president said as the crowd booed. “He just rushed to sign certificates … what’s that all about? He didn’t have to sign it. I say, why would he sign when you have these incredible hearings going on that’s showing such corruption and such horrible fraud?”

The audience applauded in approval.

“You have to figure out what that’s all about with Ducey. He couldn’t go fast enough,” Trump said.

“We’re not going to forget what Ducey just did.”

Breitbart News has not been able to confirm that it was indeed Trump.