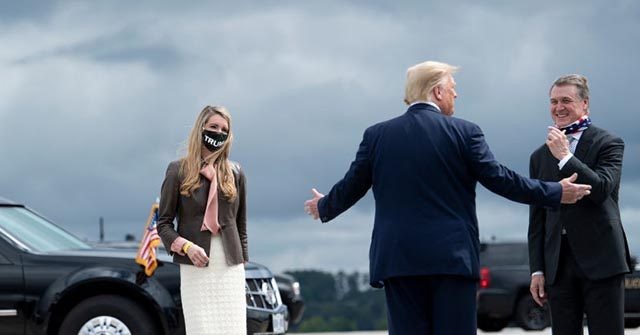 President Donald Trump reminded lawyers Sidney Powell and Lin Wood about the importance of the Georgia runoff election for Republican Sens. David Perdue and Kelly Loeffler according to a source familiar with the call.

Breitbart News reached out to several White House sources for confirmation of the news but did not receive a response.

But the source familiar with the call told Breitbart News that Trump did speak to the two lawyers and said that while he appreciated them fighting for election integrity, he urged them to stop telling Georgia voters to boycott the runoff election.

Jonathan Swan at Axios reported a similar message Thursday from a source close to the president.

“The president directly communicated to both Powell and Wood the importance of re-electing Perdue and Loeffler, and believes his traveling to and campaigning in Georgia this weekend will make clear what MAGA voters should be doing,” Swan reported.

At a “Stop the Steal” rally on Wednesday, Powell and Wood argued that Republicans in Georgia should not even vote in another election because it would be corrupt.

“If they do not [address voter fraud allegations], if Kelly Loeffler and David Perdue do not do it, they have not earned your vote,” Wood said. “Don’t you give it to them. Why would you go back and vote in another rigged election for God’s sake? Fix it. You gotta fix it before we’ll do it again.”

As Breitbart News reported, Wood has a history of financially supporting Democrat candidates and causes in Georgia.

In response to the story, Lin defended his donations to Democrats as part of his historically “nonpartisan” behavior until he sided with Trump and supported Republicans.

Powell also said that there should not even be a runoff election without major changes to the system.

“There should not be a runoff,” she said. “Certainly not on Dominion machines. I think I would encourage all Georgians to make it known that you will not vote at all until your vote is secure.”

On Thursday, President Trump challenged Gov. Brian Kemp to allow signature verification in the presidential election results, which would help secure the election in Georgia.

“If that happens, we quickly and easily win the State and importantly, pave the way for a big David and Kelly WIN!” he wrote:

The “Republican” Governor of Georgia, @BrianKempGA, and the Secretary of State, MUST immediately allow a signature verification match on the Presidential Election. If that happens, we quickly and easily win the State and importantly, pave the way for a big David and Kelly WIN!

Despite the president’s frustration with Gov. Kemp and Secretary of State Brad Raffensperger, he continues to support both senators in the runoff election.

Last Friday, Trump told Georgia supporters that even though the 2020 election was a “total scam,” it was important not to boycott the upcoming run-off election in Georgia on January 5.