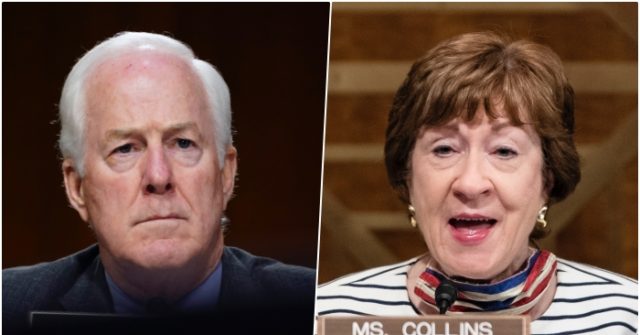 Republican Sens. John Cornyn (R-TX) and Susan Collins (R-ME), both of whom just won reelection, say the U.S. Senate must start with an amnesty for illegal aliens enrolled in the Deferred Action for Childhood Arrivals (DACA) program in an effort to reach “comprehensive immigration reform.”

During a summit hosted by the pro-amnesty, pro-mass immigration group American Business Immigration Coalition, Cornyn said he considers an amnesty for the roughly 800,000 illegal aliens enrolled in DACA — and potentially the millions more who are eligible for the program — a starting point in the new Congress.

“I personally think the most important starting point is DACA … in my view, DACA is a good place to start,” Cornyn said.

Cornyn’s opinion is vital as he currently heads the Senate Subcommittee on Border Security and Immigration and is a member of the Senate Judiciary Committee. During his remarks, Cornyn suggested working with Joe Biden’s White House on a DACA amnesty.

“The only way to achieve [comprehensive immigration reform] is Congress working on a bipartisan basis with the White House,” Cornyn said. “So I believe we need to take action and give these young men and women the certainty they deserve.”

Likewise, Collins — who most recently staved off a challenge from Democrat Sara Gideon — said the first issue on immigration that the new Congress should advance is an amnesty for DACA illegal aliens.

“There are three areas that we could start with. The first is the DACA population, the DREAMers,” Collins said before touting her support for H-2B visas, H-2A visas, and more foreign worker migration to take U.S. jobs in rural areas.

Currently, House Democrats are drafting an amnesty plan that will provide at least one subgroup of illegal aliens the ability to permanently remain in the U.S. and eventually apply for American citizenship. Democrat presidential candidate Joe Biden has vowed to send an amnesty plan to the Senate in his first 100 days in office.

A DACA amnesty would put more citizen children of illegal aliens — commonly referred to as “anchor babies” — on federal welfare, as Breitbart News reported, while American taxpayers would be left potentially with a $26 billion bill.

At the southern border, a DACA amnesty has the potential to trigger a border surge that could triple the number of illegal aliens pouring through the border. Since DACA’s inception, more than 2,100 recipients of the program have been kicked off because they were found to be criminals or gang members.