ATLANTA — Roger Stone is urging Georgians to vote for Republican Sens. David Perdue and Kelly Loeffler in the January 5 Senate runoff election in the wake of attorneys Sidney Powell’s and Lin Wood’s calls to refrain from voting.

Stone, a longtime Republican operative, wrote Wednesday on Parler it is “imperative” that voters turnout for the Republican candidates and that he disagrees with Powell and Wood, who told a crowd yesterday in Alpharetta, Georgia, that Georgians should not vote in the upcoming election.

“It is imperative that Republicans, conservatives, libertarians, and disaffected Democrats turn out and vote for the two Republicans @kloeffler and David Perdue in the peach state,” Stone wrote: 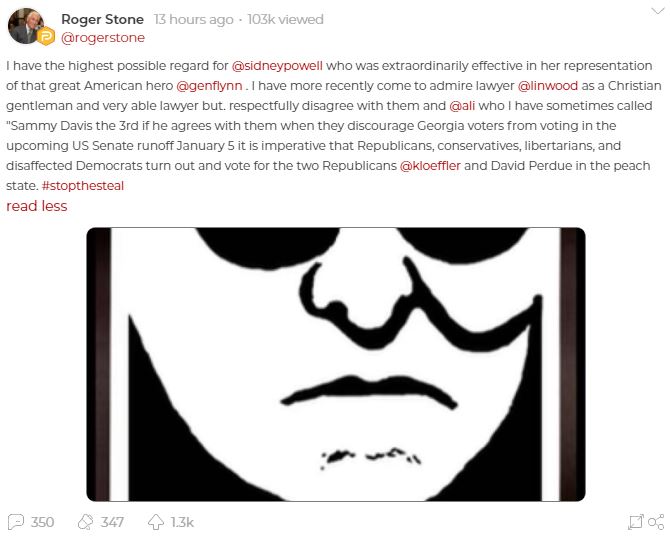 Stone added Thursday, “A Republican U.S. Senate is the only thing that will stand between Joe Biden’s disastrous left-wing agenda in the event that he is able to successfully heist the 2020 election despite having received fewer legal votes than Donald Trump.”

Stone’s message aligns with President Donald Trump’s calls for voters to turn out for the runoff election regardless of his allegations that the presidential election was a “total scam”:

No, the 2020 Election was a total scam, we won by a lot (and will hopefully turn over the fraudulent result), but we must get out and help David and Kelly, two GREAT people. Otherwise we are playing right into the hands of some very sick people. I will be in Georgia on Saturday! https://t.co/1ziqFq9S6O

Powell and Wood — who are not affiliated with Trump’s legal team, which is suing in a number of states over the election results — have also claimed mass fraud occurred in the presidential election. They have however deviated from Trump’s message by telling voters they should not vote in the Georgia runoff because of the alleged fraud.

“I think I would encourage all Georgians to make it known that you will not vote at all until your vote is secure, and I mean that regardless of party,” Powell said Wednesday.

Wood shared her sentiment, asking, “Why would you go back and vote in another rigged election for God’s sake? Fix it. You gotta fix it before we’ll do it again.”

Stone said on Wednesday that while he admired Powell and Wood for their past legal endeavors, he disagreed with them, adding on Thursday, “I respectfully urge Sidney Powell and Lin Wood to revise their reviews.”

Per Breitbart News’s Charlie Spiering, the president reportedly called Powell and Wood amid the aftermath of their event and said that while he appreciated them fighting for election integrity, they should stop telling Georgia voters to boycott the runoff election.

Trump will host a rally Saturday in Valdosta, Georgia, to campaign for Perdue and Loeffler.