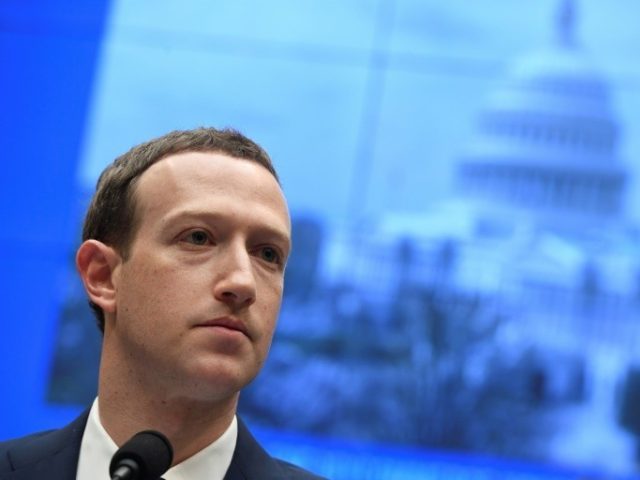 Mark Zuckerberg’s Facebook corporation discriminated against thousands of American graduates as it tried to hire foreign workers via the federal green card process, according to a December 3 lawsuit filed by the Department of Justice (DOJ).

“The Department of Justice’s lawsuit alleges that Facebook engaged in intentional and widespread violations of the law by setting aside positions for temporary visa holders instead of considering interested and qualified U.S. workers,” Assistant Attorney General Eric Dreiband of the DOJ’s Civil Rights Division said in a statement.

“The lawsuit alleges that Facebook refused to recruit, consider, or hire qualified and available U.S. workers for over 2,600 positions that Facebook, instead, reserved for temporary visa holders,” the statement said.  The DOJ added:

The positions that were the subject of Facebook’s alleged discrimination against U.S. workers offered an average salary of approximately $156,000. According to the lawsuit, and based on the department’s nearly two-year investigation, Facebook intentionally created a hiring system in which it denied qualified U.S. workers a fair opportunity to learn about and apply for jobs that Facebook instead sought to channel to temporary visa holders Facebook wanted to sponsor for green cards.

In its investigation, the department determined that Facebook’s ineffective recruitment methods dissuaded U.S. workers from applying to its PERM positions. The department concluded that, during the relevant period, Facebook received zero or one U.S. worker applicants for 99.7 percent of its PERM positions, while comparable positions at Facebook that were advertised on its careers website during a similar time period typically attracted 100 or more applicants each. These U.S. workers were denied an opportunity to be considered for the jobs Facebook sought to channel to temporary visa holders, according to the lawsuit.

The discriminatory behavior alleged by the DOJ is reportedly widespread among Silicon Valley and Fortune 500 companies, partly because visa fraud and anti-American discrimination are enabled by loopholed federal laws.

The legal process used by corporations to get green cards and work permits for their foreign workers is “highly susceptible to fraud,” a November report by the Department of Labor’s Inspector General (IG) said.

“The H-1B visa [worker program] has no requirement for employers to prove they first tried hiring American workers,” said a December 3 tweet from U.S. Tech Workers, a group that campaigns against the visa worker program. “But the Employment-Based Green Card process does … [so] companies like Facebook need to find ways to turn down Americans so their [H-1B] foreign worker can get a Green Card.”

Facebook has a policy of favoring H-1B workers over Americans, and encouraging hiring managers to favor Chinese and Korean visa workers over other visa workers, according to a leaked document released by Project Veritas.

“When hiring for HR positions, it’s important to prioritize H-1B visa workers, and this will stimulate the process of diversification of the workplace,” says the March 2020 document, titled “Diversity Initiative.”

Federal data shows that the company includes a large population of H-1Bs, including many Indian H-1B workers. The memo says that “priority may be given to H-1B applicants from China and Korea to foster larger communities of diverse workers at Facebook.”

The document also says that foreign applicants can be favored over American graduates. “Although not mandatory, we recognize that the priority of H-1B applicants in favor of American applicants is for the greater good of company culture,” the document reads.

Corporate bias in favor of foreign workers sidelines millions of American graduates and denies them good jobs in Fortune 500 companies.

The hiring of foreign contract workers has also displaced millions of American professionals and has forced many into retirement or alternative careers, including real estate and journalism. In particular, the CEO-imported laborforce of Indian workers, managers, and subcontractors has also imported India’s workplace culture, pay scales, and labor practices into the U.S. white-collar labor market.

From 2016 to 2019, the median or midpoint income of college graduates fell by two percent, according to a September report by the federal reserve., even as wages for blue-collar jumped sharply.

The salary drop happened as companies have created a huge and captive third-class workforce of roughly 600,000 foreigners who must keep working for the companies that sponsored them for green cards.