Nothing like a Christmas tree to get the office in the spirit, but an Alabama Sheriff’s Office is decorating its tree with mug shots … and lots of people aren’t merry about it.

The Mobile County Sheriff’s Office has hung what it calls “Thugshots” — mug shots of all the people it arrested this past year. The office posted a photo Thursday of the tree — which also appears to have jail-issued sandals as the star.

The FB post starts with “HAPPY THUG THURSDAY MOBILE,” adding … “We have decorated our Tree with THUGSHOTS to show how many Thugs we have taken off the streets of Mobile this year!” 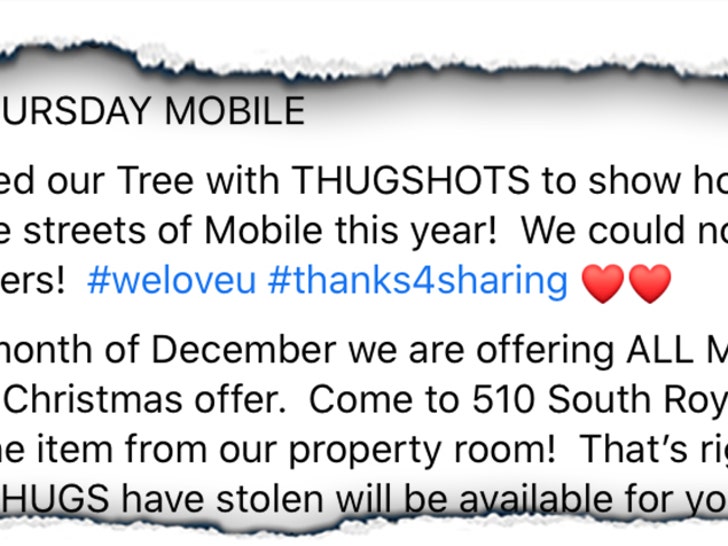 Right off the bat, the liberal use of the word “thug” rubbed some people the wrong way.

The post goes on to offer a Christmas special for “ALL MOBILE COUNTY THUGS” … they can come to the property room, pick out some stolen goods … then get hauled off to jail. They also joked about free COVID tests for all prisoners, along with a “custom fitting” for a holiday jumpsuit.

Of course, in a year in which police brutality has been a lightning rod issue and the relationship between cops and citizens is more strained than ever … critics called the Sheriff’s post insensitive, unprofessional and as one person put it, “pretty trashy.”

BTW — the controversial post comes about a year after 2 cops in the same county posted a separate Christmas-themed photo of a “homeless quilt” made out of panhandler signs.

In that case, the Mobile police chief publicly apologized. No word yet if another apology will be coming for the “Thugshots” tree.