President-elect Joe Biden said Thursday that he fractured his foot after tripping on a bath mat following a shower over the weekend and while chasing his dog Major, explaining the incident and saying it isn’t a “very exciting story.”

Biden, during an interview with CNN on Thursday, explained the incident over the weekend that resulted in a hairline fracture.

“What happened was I got out of the shower. I got a dog and anybody who’s been around my house knows — dropped, little pup dropped a ball in front of me, and for me to grab the ball,” Biden explained.

“And I’m walking through this little alleyway to get to the bedroom, and I grabbed the ball like this and he ran,” Biden continued. “And I’m joking, running after him and grab his tail. And what happened was that he slid on a throw rug, and I tripped on the rug he slid on.” 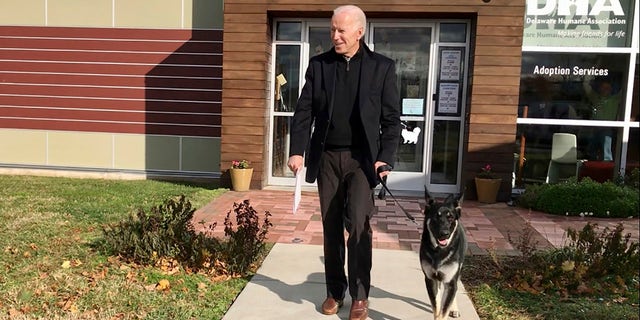 This Nov. 16, 2018, photo, file provided by the Delaware Humane Association shows Joe Biden and his newly-adopted German shepherd Major, in Wilmington, Del. President-elect Biden will likely wear a walking boot for the next several weeks as he recovers from breaking his right foot while playing with his dog Major on Saturday, Nov. 28, 2020, his doctor said. (Stephanie Carter/Delaware Humane Association via AP)

Biden’s team, on Sunday, confirmed the president-elect’s injury, saying that the 78-year-old twisted his ankle while playing with his dog Major and would be examined by an orthopedist “out of an abundance of caution.”

“Initial X-rays are reassuring that there is no obvious fracture and he will be getting an additional CT for more detailed imaging,” his personal doctor, Kevin O’Connor, said in a statement. “Follow-up CT scan confirmed hairline (small) fractures of President-elect Biden’s lateral and intermediate cuneiform bones, which are in the mid-foot.”

O’Connor said that Biden is expected to wear a boot for several weeks during his recovery.

The injury is not expected to have a significant impact on Biden’s schedule during the presidential transition.