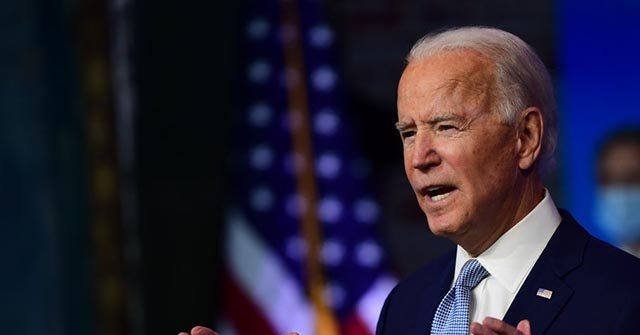 Facing the prospect of a Republican-controlled Senate, former Vice President Joe Biden’s team is exploring the possibility of tying climate change legislation to economic relief efforts related to the novel coronavirus, according to a report.

Biden, who campaigned for the White House promising to be the most progressive president since FDR, is now facing the reality that at least the first two years of his term may be under a divided government. As such, Biden’s transition team is planning ways in which they can both work with Republicans and circumvent them if necessary.

One of the areas that Biden is eyeing is legislation to address both the economic and public health aspects of the novel coronavirus pandemic. According to the Associated Press, the former vice president’s team is hoping to use coronavirus stimulus talks as leverage to secure passage of climate change proposals that would otherwise be anathema to Republicans.

“People close to Biden’s transition team say they’re looking at that stimulus as a potential avenue for enacting some climate reforms — like aid for green jobs or moving the nation toward a carbon-free energy system — that might be tougher to get on their own,” the outlet noted Friday.

The Biden team’s planning comes as control of the United States Senate is set to be determined by two runoff elections in Georgia in early January. Republicans, who have held the Senate in 2015, need only to win one of the contests to maintain control of the chamber.

If the GOP were to retain control, many believe that some of Biden’s biggest campaign promises would be unlikely to receive congressional approval, especially on issues relating to climate change.

Biden, whose environmental agenda is heavily influenced by the recommendations of a unity task force set up with Sen. Bernie Sanders (I-VT) after the Democrat primaries, has proposed spending $2 trillion over four years to combat climate change.

A major portion of the money will be used to create one million new jobs in the auto industry by boosting the production of energy-efficient vehicles. In order to achieve the goal, Biden is backing legislation, introduced by Senate Minority Leader Chuck Schumer (D-NY), to incentivize individuals to trade in their gas-powered vehicles for ones running on either electricity or hydrogen.

The former vice president has also proposed to adopt a 100 percent clean-electricity standard by 2035. A similar idea was initially raised by Gov. Jay Inslee (D-WA) during his own ill-fated run for the Democrat nomination in 2019. If implemented, it would ensure that all electricity produced in the United States would be “carbon-free.”

Such an ambitious agenda would likely be viewed negatively by Republicans, many of whom have expressed a desire to rein in federal spending.

Although GOP control of the Senate is by no means certain, as polling shows Democrats running close in both Georgia contests, Biden appears to be planning for it either way. For instance, the Washington Post reported last month that the former vice president’s team is readying a bevy of executive orders to issue on his first day in office.

Most of the orders deal with hot button topics, such as immigration and national security, where there is likely to be little bipartisan consensus, even if Republicans do not maintain control of the Senate.

Biden, in particular, plans to reverse some of the Trump administration’s key actions, including revoking protections for illegal immigrants through the Deferred Action for Childhood Arrivals (DACA) program and leaving the Paris Climate Accord.