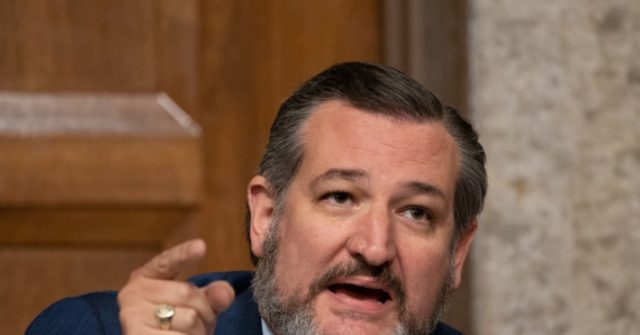 ATLANTA — Sen. Ted Cruz (R-TX) blasted attorney Lin Wood on Thursday for “trying to mislead” Georgians after Wood called for voters to boycott the critical Senate runoff election on January 5 because of alleged voter fraud that occurred in the presidential election.

Cruz emphasized the implications of Republicans refusing to vote in the runoffs, where the Senate majority hinges on at least one of the two Republican candidates on the ballot, Sens. David Perdue or Kelly Loeffler, winning their runoff race.

“I don’t know who this clown is,” Cruz wrote, “but anyone saying America would be better off w/ Chuck Schumer as Majority Leader—producing huge tax increases, the Green New Deal, massive amnesty & a packed Supreme Court destroying the Bill of Rights—is trying to mislead the people of Georgia.”

I don’t know who this clown is, but anyone saying America would be better off w/ Chuck Schumer as Majority Leader—producing huge tax increases, the Green New Deal, massive amnesty & a packed Supreme Court destroying the Bill of Rights—is trying to mislead the people of Georgia. https://t.co/jtEPT2UtzF

Cruz was responding to a clip of Wood declaring to a crowd on Wednesday that Perdue and Loeffler have not earned votes and that Georgians should therefore not vote for them. “Don’t you give it to them,” Wood said. “Why would you go back and vote in another rigged election for God’s sake? Fix it. You gotta fix it before we’ll do it again.”

Cruz suggested in a follow-up comment about Wood that “it’s almost as if…he’s a Democrat.”

Records show that Wood has voted in every general election dating back to 2000, and also show that Wood has not voted in a Republican primary since 2004 but requested Democrat ballots in the 2006, 2008, 2010, and 2018 primary elections. Breitbart News reported, “That means that even when Trump was president, in the 2018 midterm elections, Wood requested a Democrat primary ballot in Georgia and voted for Democrats in the primary in the state while Trump was universally backing Republicans there.” Wood also did not request a primary ballot at all in 2016 or 2020, both years in which Trump was on the ballot in the Republican primaries.

Wood has also donated more than $40,000 over the course of more than a decade to Democrats at the federal and state level, including former President Barack Obama, former Sen. John Edwards, Perdue’s former Senate opponent Michelle Nunn, and 2018 Georgia gubernatorial candidate Stacey Evans.

Wood refuted Breitbart News’s report on Wednesday evening, insisting he supports President Donald Trump despite contradicting the president’s calls for voters to turn out for Perdue and Loeffler. “Breitbart is dishonest. Historically, I am nonpartisan. This year, I was partisan because I love @realDonaldTrump,” Wood wrote, listing various Republicans to whom he has recently donated.

The president himself reportedly called Wood and attorney Sidney Powell, who has been working alongside Wood, and said that while he appreciated them fighting for election integrity, they should stop telling Georgia voters to boycott the runoff election.

Trump has repeatedly urged Georgians to vote for Perdue and Loeffler regardless of voter fraud claims and has planned a rally for Saturday in the Peach State to campaign for the candidates.