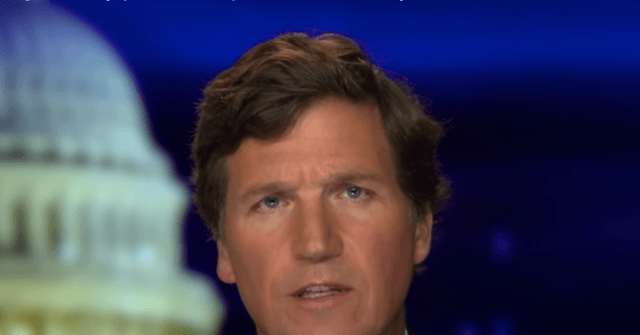 The giveaway solidifies that employment-based visas only go to temporary foreign visa workers, mostly on H-1B visas, who have been imported to the U.S. by corporations to replace American workers, thus rewarding companies who outsource American white-collar jobs.

As noted by Carlson, the giveaway comes as the Justice Department files suit against Facebook — which lobbied for the giveaway — for allegedly discriminating against Americans in favor of foreign workers.

“We’ve known for a long time that Silicon Valley wants foreign workers to dominate our economy,” Carlson said. “They don’t care what kind of effect that has on Americans. What’s surprising is that in a time of mass unemployment — and that’s what we have now, mass unemployment — the Republican Party of all people is helping them do it. That’s happening.”

“Yesterday, the Republican-controlled Senate unanimously passed a law called the ‘Fairness for High Skilled Immigrants Act.’ As if the problem with America is that we don’t have enough fairness for people from other countries. No concern about fairness for Americans,” Carlson continued. “The whole process took a matter of moments. It was led by Utah Senator Mike Lee. And without any objections, passed it.”

“Let’s say you would like ur kids to graduate from college w/ all the debt they have & get a high paying job in tech. Much less likely now. That job is going to go to someone from another country.” pic.twitter.com/l1GMLkwG31

Carlson described the giveaway as an outsourcing scheme levied against young, middle-class Americans who aspire to U.S. technology jobs. Their job prospects, Carlson said, will be crushed as a result:

What will that do to you and your kids? Let’s say you would like to have your kids graduate from college with all the debt they have and get a high-paying job in technology — much less likely now. That job is going to go to someone from another country.

They’ll tell you, “We don’t have enough well-educated people to fill those slots.” Really? As they’re forcing your kids to take classes on Zoom, as they let American schools degrade to the point that they are a joke — Republicans aren’t even disputing that point.

Your kids, your grandkids are not going to be able to get jobs in a lot of cases. And yet, the United States Senate, led by the Republicans, has decided to make it easier for foreigners to take — and these are not landscaping jobs — high-paying jobs, white-collar jobs, the kinds of jobs you actually want your kids to have.

So this bill now goes onto the House … and then onto the president who has not pledged a veto. If Silicon Valley gets its way, it will be the first and last immigration bill this administration signs off on. Hopefully, it isn’t. And you should remember who did — Mike Lee of Utah.

The legislative path forward for the giveaway, insiders told Breitbart News, is to have the House pass an identical version of the Senate-approved legislation which would send it straight to President Trump’s desk for signage or a veto. The White House has not stated whether Trump supports the giveaway.

Rep. Zoe Lofgren (D-CA) has indicated that she plans to bring the giveaway to a standstill by amending the legislation in the House which would then send it back to the Senate where it would need to be approved before Congress adjourns for the holiday season.