The number of people dying with heart disease in England has surged back above average since the first wave of coronavirus, even though dementia deaths have plummeted.

Public Health England data shows that at least 1,189 more people than usual have died of heart diseases since the end of May.

But during the same time, the number of people dying of dementia or Alzheimer’s disease – the most common form of dementia – has dropped to 3,120 below average.

Deaths from all causes spiked during the first wave of the pandemic, between March and May, as thousands of people sick with other illnesses succumbed to the rampant Covid-19 outbreak or were unable to get the medical care they needed.

Most have since tumbled down to approximately normal levels but the country’s two biggest killers show clear differences to what would be expected in a normal year.

Numbers of people dying at home have surged in tandem with heart disease fatalities.

Meanwhile, care home deaths rocketed in the first wave when the virus ripped through their vulnerable residents, many of whom have dementia, but have been significantly lower in the second wave amid stricter protections for the sector.

Professor David Spiegelhalter, a Cambridge University statistician, told MailOnline it was likely that dementia patients were killed in such huge numbers at the start of the outbreak that fewer are vulnerable to it now, and also that many Covid victims will also have dementia but have the virus listed as their main cause of death. 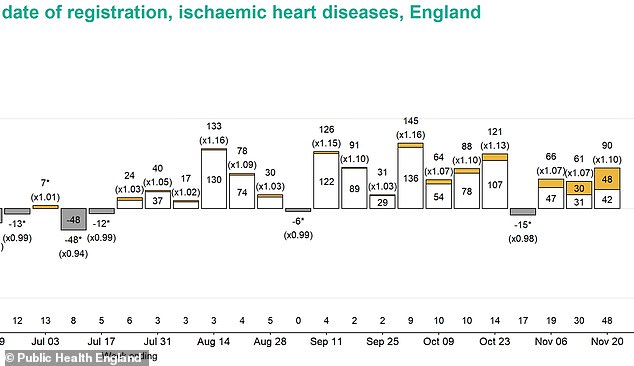 Public Health England data show that for the majority of weeks since June the number of people dying of heart disease has been higher than average. Every bar that rises up rather than down represents a number above average for that week of the year. Yellow boxes show deaths from Covid-19 in heart patients, while white boxes are deaths among people who did not have the coronavirus 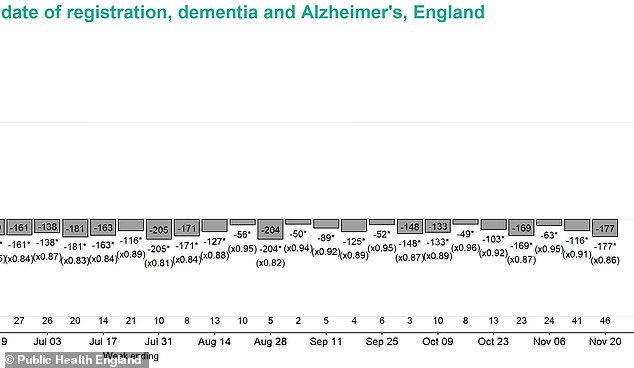 Deaths caused by dementia have been below average for every week since the summer, after spiking to levels considerably higher than normal during Britain’s first wave. Normally, deaths would be spread out more evenly across the year but Covid outbreaks in care homes likely brought thousands of them forward by weeks or months

Numbers from PHE’s ‘excess mortality’ statistics show that dementia deaths have been consistently below average since the first week of June.

Looking week by week, they dropped furthest in the seven days to July 31, when there were 205 fewer people killed by the disease than would be expected.

Dementia and Alzheimer’s are the country’s biggest cause of death and accounted for 65,387 fatalities in 2018 – an average of 1,257 per week.

A drop of 205 in a week represents a fall of around 16 per cent below the average.

Heart disease, also known as coronary heart disease or, officially, ischaemic heart disease, is England’s second biggest killer and caused 51,989 deaths in 2018, the most recent data from the Office for National Statistics shows.

This corresponds to an average of around 1,000 per week.

The biggest surge since Covid’s first wave saw deaths rise to 145 more than normal in the week that ended October 2  – an increase of approximately 14 per cent.

Patterns of deaths have painted a confusing picture this year in England because Covid-19 means thousands more people have died than in an average year – the Office for National Statistics now estimates around 63,000 more people than usual have died so far.

A student newspaper in the US has retracted an article after an economics researcher claimed Covid-19 deaths in the country were just reclassifications of fatalities that would have happened anyway.

In a story published by the Johns Hopkins News-Letter, the student paper of the world-famous Maryland university, Genevieve Briand – who runs an economics masters programme there – said there is ‘no evidence that Covid-19 created any excess deaths,’ adding: ‘Total death numbers are not above normal death numbers’.

She had pointed out that official government data showed there had been a decline in deaths due to heart disease, as well as those caused by lung conditions, Alzheimer’s, diabetes and flu.

And the declines, she said, showed numbers that lined up with the numbers of people dying from Covid-19. Her conclusion: that if coronavirus hadn’t been killing people, the other illnesses would have done it.

But the Johns Hopkins News-Letter deleted the article and issued an apology last week, saying that the interview with Ms Briand had contributed to the spread of misinformation.

The editors said: ‘Briand was quoted in the article as saying, “All of this points to no evidence that COVID-19 created any excess deaths. Total death numbers are not above normal death numbers.”

‘This claim is incorrect and does not take into account the spike in raw death count from all causes compared to previous years.

‘According to the CDC, there have been almost 300,000 excess deaths due to COVID-19. Additionally, Briand presented data of total U.S. deaths in comparison to COVID-19-related deaths as a proportion percentage, which trivializes the repercussions of the pandemic.

‘This evidence does not disprove the severity of COVID-19; an increase in excess deaths is not represented in these proportionalities because they are offered as percentages, not raw numbers.’

And it has recorded approximately the same number of deaths from coronavirus, meaning deaths from other causes are actually the same as, or even lower than normal.

This may be because many people who have died of Covid-19 so far would likely have died this year anyway and their causes of death have simply been reclassified.

This may be particularly true for dementia patients, many of whom are frail care home residents who have been found to be most at risk of dying from coronavirus.

Professor Spiegelhalter said: ‘It’s a complex picture. Many of the Covid deaths in the first wave were of people with Alzheimer’s and dementia, so some of the deficit in such deaths now will be the result of those deaths having been brought forward by six months.

‘Also some of the deficit may be due to people dying with both Alzheimer’s and dementia and Covid, and then having Covid put as the primary cause – non-Covid deaths are running slightly below normal at the moment.’

During the first wave, testing for coronavirus was poor and not available to care homes, so many people who died of the virus weren’t recorded by the Government.

A rise in non-Covid heart disease deaths, however, suggests that patients with the illness, which takes many years to develop and can often be treated for a long time before it’s fatal, have not been getting the medical care they need.

This may be because they were unable to get appointments when the NHS limited hospital capacity during the first wave, or because they didn’t go to see a doctor when they should have out of fear of catching Covid.

At the same time that heart disease deaths have surged, so too have those caused by liver failure – and both have risen in tandem with the number of people dying at home.

Tens of thousands of people more than usual have died in private homes this year, while fewer than average died in hospitals, suggesting many were not seeking medical care.

It is not clear how many of the heart disease patients died at home compared to in hospital.

Professor Spiegelhalter said he has been calling for more data to try and understand the links in more detail.

Experts have raised concerns that the home deaths could have been avoided and that the people didn’t get the same care or pain relief they would have had in hospital.

Last month Professor Spiegelhalter said: ‘Non-Covid deaths in hospital have correspondingly declined [as at-home deaths rose], suggesting most of these deaths would normally have occurred in hospital, and people have either been reluctant to go, discouraged from attending, or the services have been disrupted.

‘It is unclear how many of these lives could have been extended had they gone to hospital, for example among the… extra deaths from cardiac arrhythmias (abnormal heartbeats).

‘Crucially, data cannot tell us about the quality of these deaths, particularly in terms of the end-of-life care provided to the patients and the support for their families.’

‘Crucially, the ONS data cannot tell us about the quality of these deaths, particularly in terms of the end-of-life care provided to the patients and the support for their families.’

Professor Kevin McConway, a statistician at the Open University, added: ‘Deaths at home are still running considerably above the average of the previous five years…

‘Most of those deaths don’t have Covid-19 mentioned on the death certificate at all.

‘ONS, and PHE, have done some previous analyses of excess deaths at home, and statistics of that sort can be helpful up to a point – but they can’t tell us what sort of a death these people had in their homes, or what the care was like at the end of their lives.’