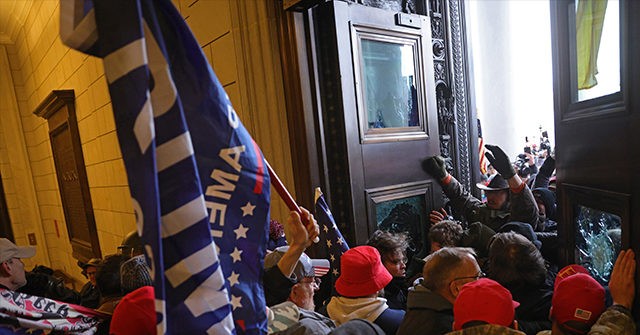 The U.S. Department of Justice (DOJ) and the Federal Bureau of Investigation (FBI) are scouring the country for more than 170 suspects in the January 6 attack on the U.S. Capitol. The FBI reports receiving more than 100,000 tips from the public.

At a press conference on Tuesday, Michael Sherwin, interim United States Attorney for the District of Columbia, said that 70 individuals already face charges and that number could grow exponentially over the coming weeks and months.

The New York Times reported the attack could have ties to “domestic terrorist organizations” or “foreign adversaries” that could have “radicalized Americans” to take part in it:

In the sprawling Justice Department criminal inquiry run out of the F.B.I.’s Washington field office — the country’s second largest, with about 1,600 employees — agents and support staff have established a nationwide dragnet to identify members of the mob. At least five people died during the attack and in its immediate aftermath, including a police officer. In particular, the F.B.I. is working closely with the Capitol Police and the Metropolitan Police Department in Washington to track down those whose attacked law enforcement.

The F.B.I. has moved quickly to ease some bureaucratic hurdles to making arrests, and it has received more than [100,000] photographic and video tips after asking for the public’s help in identifying suspects. Agents were also scrubbing airline passenger manifests and video of air travelers to and from Washington to find potential suspects.

But some prosecutors have expressed concerns that the Justice Department is creating a bottleneck by funneling prosecutions through Washington. The lack of public appearances by top national security officials in the Trump administration has also prompted criticism that the federal government is failing to provide the reassurance, information or leadership that it typically would in a time of national crisis.

The F.B.I. is reviewing cellphone videos and security camera footage to identify people who were in the Capitol during the event.

The Times described “an overwhelmed Capitol Police” that allowed all except a few protesters to leave the Capitol building.

“That failure to detain the suspects created a major obstacle for federal investigators, who must now fan out and look for them across the country.”