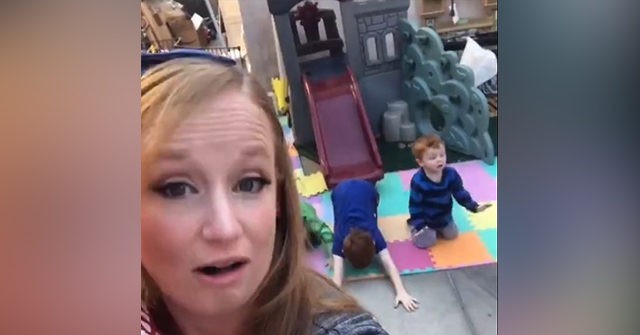 After a white mother named Justine Champion forced her four young sons to worship black women, a woke backlash forced her to pull the video.

She then tried to stop being “problematic” with a second video, but was attacked by the Woke Nazis over that one, as well.

This mom on TikTok is going viral for having her kids kneel and pray to black women pic.twitter.com/Hi94ZvMl7C

Obviously, I have no sympathy for Ms. Champion. Using your children like that is grotesque in the extreme. But this is a lesson in how white people can never grovel enough to our Woke Fascist Overlords, which is all part of the plan. The simplest and most effective way to terrorize fools like Mother Champion is to forever change the rules, or better yet, to have no rules at all.

So on December 30, Champion published a Tik Tok video of her four young sons worshiping black women. “Me teaching my white boys how to behave,” the text on the video explained.

“Black women are the reason [President] Donald Trump is no longer gonna be our president,” she says as the boys bow in reverence and then march around chanting “all hail black women.”

This humiliation required five takes, according to the Worst Mom Ever.

The Woke Nazis went right after her for making these “videos just for clout and not because they genuinely agreed.”

“I’m a woman of color and agreed,” one commenter said on the Tik Tok video. “But it’s annoying when people make these videos just for clout and not because they genuinely agreed.”

So Champion responded with this mewling reply:

I know the type you’re talking about, so I’m not upset or anything, but I just wanted to clarify that that’s not why I made this video. If you want to go onto my page and see some of my content, you can see some of the things [I] regularly do, the actions that I take to help the communities that are marginalized in the United States.

According to the New York Post, she added in her defense that she’s gone viral before for posting videos of “women and people of color and the history that’s left out of our textbooks.”

Nevertheless, late last week she took the video down, explaining in a new video that “the LAST thing I wanted to do was put WOC I danger.”

So she then replaced the original video with a new video the Post described as “a snippet of the original followed by a black woman speaking straight to camera, explaining this kind of language is ‘putting a target on our back.’”

After the Woke Nazis went after her again, this time on Twitter — including Taylor Lorenz, who works for the New York Times — Champion chastised herself again:

On Friday, Champion responded to Lorenz’s tweet to say that, on reflection, she should have asked herself “what would black women do?”

“I took it down after listening to some black women and their concerns,” she wrote. “Others want me to put it back up because they loved it. Either way I’m grateful they helped get rid of trump.”

The only thing I learned from this experience is that people on the left have no self-respect.