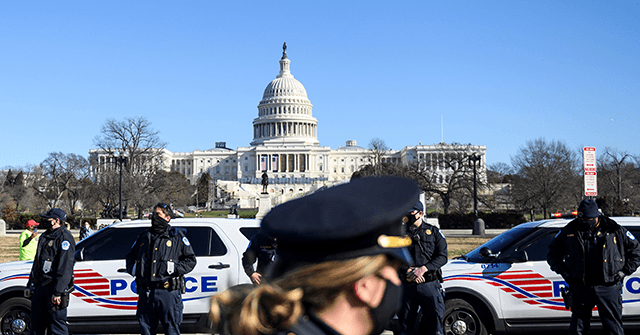 Federal law enforcement is investigating more than a dozen police officers in D.C. and other jurisdictions across the country for alleged participation in protests over election results, including at least two officers who were at the Capitol when it was attacked.

CNN reported on two officers who have been suspended following their alleged participation in Wednesday’s protest at the Capitol building:

One of the Capitol police officers took a selfie with someone who was part of the mob that overtook the Capitol and the other wore a “Make America Great Again” hat and started directing people around the building, according to Rep. Tim Ryan, an Ohio Democrat. He didn’t disclose how many other officers were under investigation but confirmed it was between 10 and 15, and didn’t say what they were being scrutinized for except that it was their behavior during the riot.

[Ryan’s] spokesperson said at least 10 Capitol Police officers are being investigated for their roles in the riot. A House aide separately said there are as many as 17 officers under investigation as part of eight investigations into the insurrection at the Capitol. At least seven officers in five other departments across the country have come under internal investigations as their presence in Washington during the assault comes to light through social media or other means. One officer in New York, one in Philadelphia, two in Seattle, two in Virginia and one in Texas are under investigation by their departments for potential rules violations. Additionally, some departments have been contacted by the FBI as part of their criminal investigation into the overrunning of the Capitol.

Acting Chief of the U.S. Capitol Police Yogananda Pittman issued a statement that her agency “has been actively reviewing video and other open source materials of some USCP officers and officials that appear to be in violation of Department regulations and policies. Our Office of Professional Responsibility will investigate these behaviors for disciplinary action, up to, and including, termination. Several USCP officers have already been suspended pending the outcome of their investigations.”

CNN reported that no law enforcement member has been charged with a crime.

The Seattle police department has placed at least two officers on administrative leave while officials investigate if they took part in Wednesday’s events, the department’s chief of police, Adrian Diaz, said in a statement on Friday.

“The Department fully supports all lawful expressions of First Amendment freedom of speech, but the violent mob and events that unfolded at the US Capitol were unlawful and resulted in the death of another police officer,” the statement read. “The incident has been forwarded to the Office of Police Accountability for full review of any SPD employee activities at the U.S. Capitol.”