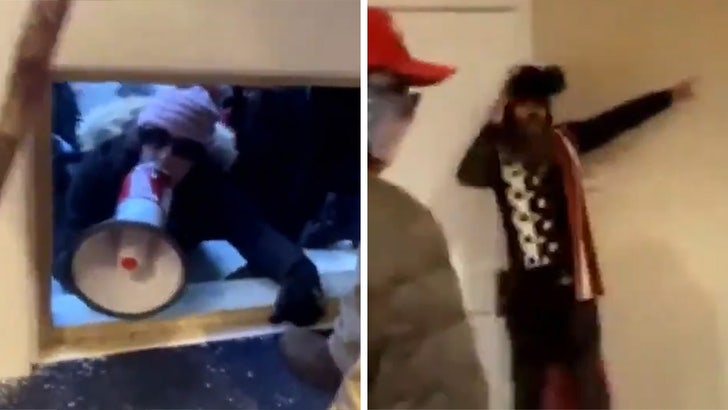 The mob of pro-Trump insurrectionists who stormed the Capitol absolutely plotted together to wreak havoc — led by a woman with inside knowledge … and a megaphone.

New video footage from inside the Capitol shows many rioters scrambling to coordinate their movements. One man is heard asking about the floor plans, then another guy is seen directing people to a door … while there are also discussions about where cops are located.

Then, another man yells … “We need enough people. We need to push forward!”

Most disturbing though, is the woman with the megaphone who starts barking orders from the outside through a broken window. She seems to know the layout of the Capitol pretty well, and after directing traffic she shouts … “People should probably coordinate together if you’re gonna take this building.”

The rioters are then seen picking up furniture, seemingly to go break windows at the megaphone lady’s behest.

As you know … Capitol Police completely lost control of the building for several hours to the pro-Trump mob, who occupied, vandalized and looted the place. During the breach, members of Congress were rushed away to safety, and like AOC recently stated … feared they might be killed.

Authorities believe some of the insurrectionists might have been plotting to commit more nefarious acts, and the FBI is investigating Capitol PD and other building staffers to determine if they assisted in the attack.