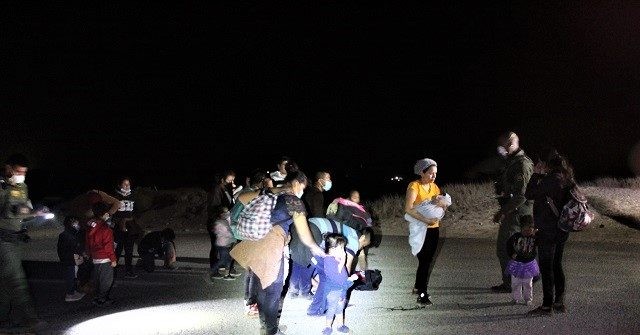 Unaccompanied children continue crossing the Mexican border into Texas as Health and Human Services struggles to accommodate the increased numbers by opening new Emergency Intake Sites. Breitbart Texas observed nearly 300 migrants illegally crossing the Rio Grande in Roma, Texas, on Wednesday night. The groups of migrants consisted of family units and dozens of unaccompanied children looking to surrender to the few awaiting Border Patrol agents near the edge of town.

Cartel-connected human smugglers faced no resistance from law enforcement during their crossing as Border Patrol agents struggled to keep up with the ever-increasing rate of crossings in the area. In an exclusive video, Breitbart Texas interviewed two unaccompanied children shortly after they crossed the border. The unaccompanied children traveled alone and said they did not know their mother’s whereabouts. They also claimed they did not know their father.

Breitbart Texas
The teenage brother and sister, ages 13 and 15, claim to be traveling to San Francisco, California, to meet up with an uncle and a grandfather. The scene repeated itself throughout the night as children crossed the river alone or with family members. The children ranged in age from three months old to 17 years.

According to the latest statistics released by Health and Human Services, more than 22,000 unaccompanied children are currently in custody. They are being held at temporary Emergency Intake Sites, permanent shelters, or Border Patrol Stations. HHS estimates the daily cost to house the children is in excess of $6 million per day.

Border Patrol agents in the vicinity spoke of being overwhelmed by the volume of migrant crossings in such a short timeframe. Many of the migrants appeared nervous and tired from the journey to the United States. According to a few of the agents, who spoke on a condition of anonymity, this is almost a nightly occurrence.