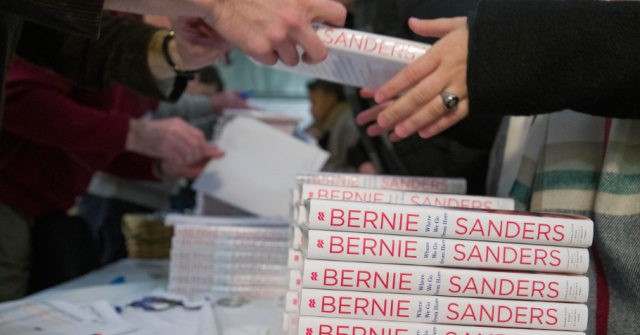 The Washington Post has chosen to report on Republicans’ schemes of boosting book sales while ignoring Sen. Bernie Sanders’ (I-VT) use of a similar method in 2015.

Peter Schweizer, author of Profiles in Corruption: Abuse of Power by America’s Progressive Elite, detailed how Bernie Sanders used $445,000 in 2015 to purchase and boost his own book through his campaign account, The Speech, while receiving $6,700 in royalties from the 2015 purchases.

Bernie was later asked on Fox News if his success was “the definition of capitalism.”

“You know, I have a college degree,” he said.

But the Washington Post has ignored all this in a piece entitled, “The GOP’s big bulk book-buying machine is boosting Republicans on the bestseller lists,” where they document a complaint by Campaign Legal Center to the Federal Election Commission and the Senate Ethics Committee “about the manner in which Cruz’s campaign aides went about bulk buying and promoting the senator’s latest volume.”

The watchdog alleges to the authorities, “Senator Cruz’s campaign committee, Ted Cruz for Senate, spent up to $18,000 on Facebook advertisements exclusively promoting Senator Cruz’s book and urging viewers of the ads to purchase the book from third-party sellers.”

Be that as it may, Breitbart News reported, “Sanders is second only to the late John McCain in terms of the volume of books he has written.”

“The only person that’s written as many books as him in the Senate is the late John McCain, and McCain, you could argue, had some war stories to tell,” said Schweizer. “[John McCain] did donate some of those proceeds to charity. Bernie does not do that. The biggest charity in Bernie’s life is Bernie.”