“I’m going to fight with all of the people who stand for justice,” Waters told reporters shortly before an 11 p.m. curfew. “We’ve got to get justice in this country and we cannot allow these killings to continue.”

“We’ve got to get more confrontational. We’ve got to make sure that they know that we mean business.”

PAT ROBERTSON: DEREK CHAUVIN SHOULD BE PUT ‘UNDER THE JAIL’ FOR DEATH OF GEORGE FLOYD

Waters said she was “hopeful” Chauvin would be convicted of murder, but if he isn’t, “we cannot go away.”

“We’ve got to fight for justice,” she added, saying she is pressing for a police reform bill to be passed in Congress but said Republicans would likely stand in the way.

She reportedly said she plans to stay in Minnesota until Monday when closing arguments are expected in the Chauvin trial, according to New York Times reporter Nicholas Bogel-Burroughs.

“This is a very difficult time in the history of this country,” Waters, 82, a member of Congress since 1991, told The Associated Press. “We have to let people know that we are not going to be satisifed unless we get justice in these cases.”

As reporters gathered around her, Waters said the protesters ultimately needed to show up at the polls for candidates who align with their views.

“The way to get in control is not to allow them to win. … You’ve got to take the power.”

Chauvin is accused of killing Floyd on May 25, 2020, by kneeling on Floyd’s neck for several minutes. Defense witnesses have spoken of Floyd’s health issues and drug use as other possible causes.

Others appearing in Brooklyn Center on Saturday included the Rev. Jesse Jackson. The crowd was demonstrating for the seventh straight night against the fatal police shooting of Daunte Wright, 20, during a traffic stop last Sunday. 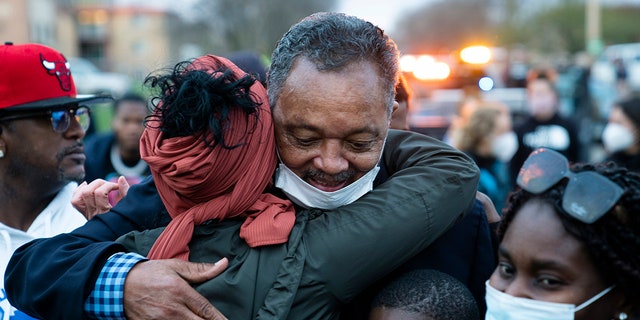 The clashes have included demonstrators throwing objects at police. Police arrested more than 100 people Friday but it was unlcear if any arrests were made Saturday.

The officer who allegedly killed Wright, identified as Kim Potter, resigned last week, as did the Brooklyn Center police chief. Potter claimed she accidentally grabbed her gun instead of a stun gun and shot Wright with the firearm. She faces manslaughter charges.

Waters reportedly left the protest shortly before the curfew took effect. A small crowd remained defiant after the curfew began.