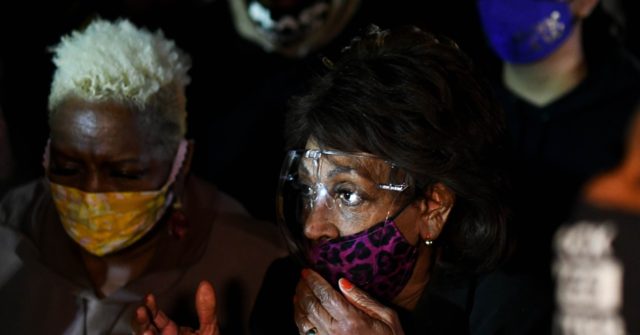 Rep. Maxine Waters (D-CA) joined demonstrators Saturday evening outside the police station in Brooklyn Center, Minnesota, and told Americans to take to the streets unless Derek Chauvin is convicted for murder in the death of George Floyd.

Waters joined protesters who are angry over the shooting of Daunte Wright, 20, as he fled arrest after a traffic stop earlier this month. Officers discovered that there was a warrant for Wright’s arrest over accusations of attempted aggravated robbery and a gun violation. Police officer Kim Potter threatened to use her Taser against Wright, but shot him instead; he later died.

The incident was followed by protests and riots, just as the Chauvin trial was taking place several miles away.

“We’re looking for a guilty verdict,” Waters said. “And we’re looking to see if all of the talk that took place and has been taking place after they saw what happened to George Floyd, if nothing does not happen, then we know that we’ve got to not only stay in the street, but we’ve got to fight for justice,” she said.

But a conviction for manslaughter would not be enough, Waters said. The guilty verdict had to be for murder — which, she added, ought to have been first-degree murder.

Maxine Waters is marching in Brooklyn Center tonight and told people to take to the streets if Chauvin is acquitted pic.twitter.com/RemfvCCLAn

Waters said that Democrats would pass a police reform bill over the objections of “the right wing, the racists.” She had harsh words for Republicans, whom she blamed for the Capitol riot on January 6:

.@RepMaxineWaters from California is here in front of Brooklyn Center Police Department. Swarmed with cameras pic.twitter.com/jbVi437keH

The Chauvin trial will conclude with closing arguments and jury instructions on Monday.