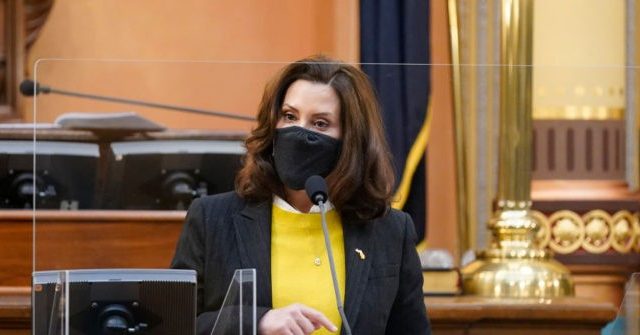 Coronavirus cases have been rising in Michigan for several days and Gov. Gretchen Whitmer (D) has blamed just about everyone but herself.

Through a press conference and television interviews, Whitmer has blamed former President Donald Trump, the state Supreme Court, the Republican-controlled legislature, once-compliant residents, and even those returning from spring break travel for the increase.

On Thursday, the governor appeared on MSNBC and pointed her finger at her political opponents for the situation.

Gov. Whitmer on whether she has the political ability to slow Michigan’s Covid surge:

“We are so incredibly divided after the politics of the last 14 months. … I’m still trying to get the legislator to deploy resources that the Trump administration sent us.” pic.twitter.com/eWMjK4H5gL

When asked if she had the “political ability” to regress and impose new restrictions, Whitmer responded, “I was sued by the Republican legislature here in Michigan. I lost in the Supreme Court. It was a Republican-dominated Supreme Court. I lost some of those executive powers.”

She continued, “We do retain some powers, but we are so incredibly divided after, I think, the politics of the last 14 months.”

That was a reference to the 2020 presidential election, when Trump pilloried Whitmer’s handling of the pandemic.

During an appearance on “Meet the Press” Sunday, Whitmer pointed the finger at Michigan’s elderly residents and families who left the state for spring break.

“This is the time of year that snowbirds come home from Florida, where people are going on spring break, and all of these things can contribute to spread,” Whitmer said, without evidence.

“Snowbirds” are those residents to spend the winter months in Florida or other warm states.

Whitmer did not mention one of her top advisers, state Chief Operations Officer Tricia Foster, whom Breitbart News found to be one of those spring break travelers the governor accused of potentially bringing the virus back to the state.

Foster posted photos of the Siesta Key trip on Facebook and admitted in a comment that she and those in her party left her teenage son behind because he had contracted the virus.

Whitmer dismissed the story as a “partisan hit job” and said, “What directors do on their personal time is their business, so long as they are safe.”
At a Wednesday press conference, the governor told reporters Michigan does not have a “policy problem,” but rather a “compliance problem,” according to the Detroit News.

“We were quite successful compared to the rest of the country,” Whitmer said regarding her lockdown orders before placing blame on worn-out residents.

“At this point, we are now 14 months in and people are tired. Every single one of us is tired. I’m tired. Dr. J is tired of this,” she said, referring to Dr. Joneigh Khaldun, her chief medical adviser.

On Friday, Whitmer expanded her mask mandate to include 2-year-olds.

Whitmer is not the only state leader deflecting blame.

“The result is that our state now finds itself in the unenviable but predictable position of having the worst rates of new infections in the nation,” Nessel said.

“I have long compared this situation to that of a serial murderer on the loose but instead of helping to track down the killer, law enforcement announces that efforts by the government to have residents lock their doors and windows is a tyrannical action.”