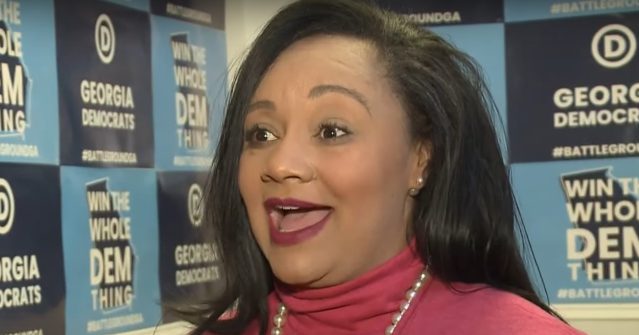 Delta’s corporate political action committee (PAC) DeltaPAC will co-host a fundraiser with a top Coca-Cola executive for a controversial House Democrat who has falsely claimed the 2018 governor election in Georgia was “stolen” from Democrat Stacey Abrams, Breitbart News has learned.

Upcoming on April 23, DeltaPAC will co-host a virtual fundraiser for Rep. Nikema Williams (D-GA), an invitation obtained by Breitbart News reveals. DeltaPAC’s treasurer, per documents filed with the Federal Election Commission (FEC), Eric Burgeson—who is also the company’s managing director of government affairs—has not replied to a request for comment from Breitbart News on the matter. Burgeson previously worked for Republicans in Washington, DC, serving in the George W. Bush administration as a Special Assistant to the President as well as Associate Director for Presidential Personnel. He also worked for former Rep. Bill Shuster (R-PA), the former chairman of the House Transportation Committee, as the committee’s chief of staff.

Landers is the chief spokesman for Coca-Cola. Interestingly, the fundraiser invitation does not mention the fact that he is a Coca-Cola executive. But according to his LinkedIn page, Landers is the Vice President, Public Policy & Government Relations, North America Operating Unit, for the Coca-Cola Company. Landers has not replied to a request for comment from Breitbart News on why he is hosting a fundraiser for Williams, and has not answered what he thinks about her false claims that the 2018 election was “stolen” from Abrams.

The fundraising invitation lists Williams’ committee assignments as well, noting she serves on the powerful House Financial Services Committee and on the Transportation and Infrastructure Committee.

Williams’ campaign has not replied to a request for comment from Breitbart News on the corporate fundraiser plans.

The news of this event is interesting because of the woke leftist turn of various corporations, including these two—Delta and Coca-Cola—in particular. Both companies—which each have huge presences in Atlanta—criticized Georgia’s new election reform law that GOP Gov. Brian Kemp signed this month.

“I want to be crystal clear,” James Quincey, Coca-Cola’s CEO, said about the law. “The Coca-Cola Company does not support this legislation, as it makes it harder for people to vote, not easier.”

“I need to make it crystal clear that the final bill is unacceptable and does not match Delta’s values,” Delta’s chief executive Ed Bastian said about it.

Technically speaking, the claims that the new Georgia law makes it harder for people to vote are untrue, as the bill actually adds extra early voting days. But part of the reason why Democrats are so upset about it is the legislation requires voter ID for absentee ballots and cuts off money that third party plutocrats previously could send to select election offices as Facebook CEO Mark Zuckerberg did in the last election through a variety of organizations.

Nonetheless, in a frenzied panic driven by Democrats and cheered on from the White House as even President Joe Biden has escalated pressure on companies to put heat on Georgia over the law, corporations have spiraled into a woke leftist downturn that runs counter to public opinion to not just this Georgia law, but also in general in order to appease loud radical leftists. Coupled together with previous corporate moves to cut off Republicans after the events of Jan. 6, along with events of the past year with the death of George Floyd in Minneapolis at the hands of now-convicted former police officer Derek Chauvin and the coronavirus pandemic, Republicans have grown very weary of corporations as the GOP moves in a more populist direction.

That shift is forcing corporations into the arms of Democrats, and it is a natural progression to see executives of major companies like Delta and Coca-Cola now openly fundraising for radical leftist Democrats like Williams in Georgia. Williams just last month falsely claimed that the 2018 election was “stolen” from Abrams—who, by the way, still refuses to concede the election to Kemp—which is a claim that is supposedly a big no-no for corporations, at least when Republicans make it as they did as the justification for challenging the Electoral College results certification in Congress on Jan. 6. But when Democrats make such a claim, given the trend of Democrats becoming the party of the corporations and the Republicans turning away from big companies, Coca-Cola and Delta executives rush forward to host huge-dollar Democrat fundraisers, events to which ordinary Americans could not afford a ticket.