Daunte Wright’s funeral is scheduled for Thursday at a church in Minneapolis, nearly two weeks after he was shot and killed by a police officer in nearby Brooklyn Center.

The Rev. Al Sharpton is set to deliver the eulogy during the funeral, which will be held at Shiloh Temple International Ministries and is set to begin at noon CT. It was unclear whether the funeral would be a public service, according to FOX 9 of Minneapolis.

On Wednesday, mourners gathered at Shiloh Temple to view the body of Wright, a 20-year-old Black man. His death sparked protests and riots that coincided with the murder trial of former Minneapolis police Officer Derek Chauvin in the May 2020 death of George Floyd. 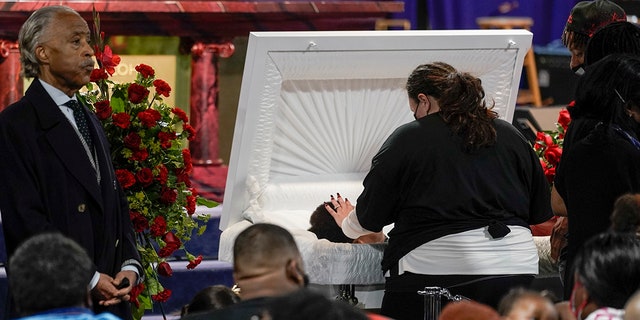 Katie Wright, mother of Daunte Wright, places her hand on her son during visitation, Wednesday, April 21, 2021, in Minneapolis. (Associated Press)

The public viewing took place a day after Chauvin was convicted of second-degree unintentional murder, third-degree murder, and second-degree manslaughter in Floyd’s death.

“People celebrated all over the country,” Sharpton said, according to the Star Tribune of Minneapolis. “As I was crying, the thing that bothered me was right down the road was Daunte Wright. … Don’t tell us what you did for George Floyd and ignore what happened to Daunte Wright. … We’re going to get Wright right in Minnesota.”

“Don’t tell us what you did for George Floyd and ignore what happened to Daunte Wright.”

Wright, 20, was shot April 11 in the Minneapolis suburb following a routine traffic stop for driving with expired tags, police said.

On Wednesday his body lay in a white, open casket covered in red roses. His parents, Katie and Aubrey, received flowers and hugs during the public viewing, which took place on their wedding anniversary, reports said.

At the viewing, a large screen behind him showed videos and photos of his friends and family.

A slideshow played images of Wright in his youth, which showed him holding a basketball trophy and wearing an Air Jordan headband. Wright played basketball at Edison High School in Minneapolis where he wore jersey No. 23 — his favorite number, the Star Tribune reported. NBA legend Michael Jordan also wore the No. 23 jersey during his NBA and college career.

Wright is survived by a 2-year-old son.

“I was really close to him when he was young,” said his aunt, Kristie Bryant, after viewing his casket, according to Reuters. “He loved basketball. He loved his son with all of his heart.”

Former Brooklyn Center police Officer Kim Potter, accused of killing Wright, has been charged with second-degree manslaughter. She mistakenly used her Glock handgun instead of a stun gun against Wright, according to police.