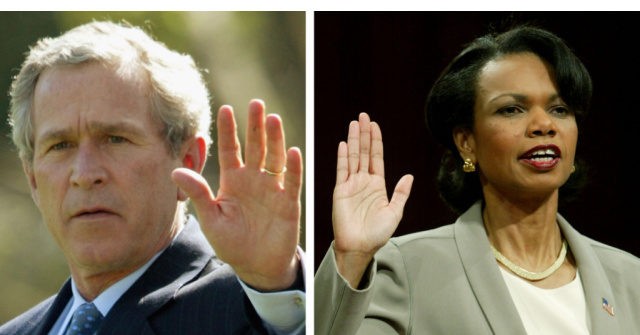 Former President Georgia W. Bush revealed Thursday that he wrote-in Condoleezza Rice, who served as his secretary of state from 2005 to 2009, in the 2020 presidential election.

“She knows it,”  Bush told People Magazine. “But she told me she would refuse to accept the office.”

Bush’s admission of support for Rice over then-Democrat candidate Joe Biden and then Republican President Donald Trump comes as the former president is promoting his forthcoming book of paintings — Out of Many, One — which highlights the stories of over 40 immigrants in the United States.

Bush has used his book tour to call on Congress to pass amnesty for illegal immigrants brought to the U.S. as children and those living in the country illegally.

“Americans who favor a path to citizenship for those brought here as children, known as ‘dreamers,’ are not advocating open borders,” Bush wrote in a Washington Post opinion-editorial on Friday. “They ought not be punished for choices made by their parents.”

“The United States is better off when talented people bring their ideas and aspirations here,” the former president added.

Bush tried to pass widespread amnesty for illegal immigrants in 2007 with the support of late Sen. John McCain (R-AZ), Sen. Lindsey Graham (R-SC), and late Sen. Ted Kennedy (D-MA). But the bill failed miserably in the Senate after only 33 Senate Democrats, 12 Senate Republicans, and one independent voted to support the bill. Fifteen Senate Democrats joined 37 Senate Republicans and one independent in voting against it.

Bush recently said his failure to pass immigration reform was among the largest disappointments of his time in the White House.

“I campaigned on immigration reform,” he told CBS News host Norah O’Donnell. “I made it abundantly clear to voters this is something I intended to do.”