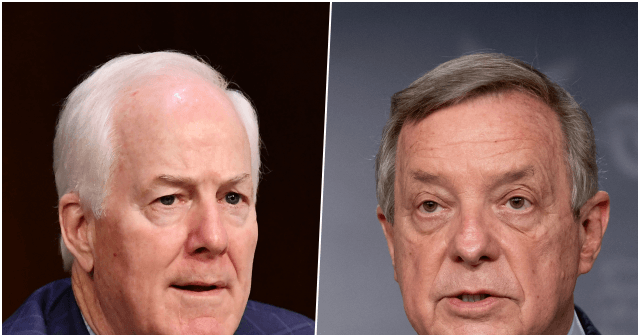 A group of Senate Republicans and Democrats met privately this week to discuss striking a deal on immigration – mainly on providing amnesty to potentially millions of illegal aliens enrolled and eligible for former President Obama’s Deferred Action for Childhood Arrivals (DACA) program.

Sens. John Cornyn (R-TX) and Dick Durbin (D-IL) led a meeting with 12 other Senate Republicans and Democrats to explore the possibility of passing an amnesty to give legal status to 3.5 million enrolled and eligible DACA illegal aliens.

In a statement to Axios, Cornyn suggested there is “pretty much consensus” to give amnesty to DACA illegal aliens, even as illegal immigration has skyrocketed at the United States-Mexico border to decade-highs.

“But I think if we did something that is pretty much consensus, like DACA, then that would be confidence-building, and then we’d kind of move on to the next,” Cornyn said.

In an interview with PunchBowl News, sponsored by pro-migration tech lobbying group FWD.us, which was founded by Facebook’s Mark Zuckerberg, Durbin also suggested that there is a “growing consensus” among Senate Republicans and Democrats on DACA amnesty.

“I believe there is a growing consensus that DACA, the DREAM Act, some version of that, is ready for passage,” Durbin said. “I have not whipped it and I haven’t gone to the Republican side but many Republicans have come up to me and said, ‘We think it’s time.’ And that was repeated at last night’s meeting.”

Durbin said Senate Democrats are looking to gather Republican support for a DACA amnesty by throwing in border security provisions, though he said a border wall would not be part of any such plan.

The amnesty discussions come as illegal immigration has overwhelmed the southern border for months, with no end in sight. In March, federal immigration officials apprehended nearly 170,000 border crossers, including more than 18,600 UACs, nearly 53,000 family units, and nearly 97,000 single adults.

Analysis conducted this month predicts that 1.2 million border crossers will be apprehended at the U.S.-Mexico border this year, not including those illegal aliens who successfully crossed into the country. This would be a level of illegal immigration not seen since the Great Recession.

Meanwhile, President Joe Biden’s administration is facilitating the mass catch and release of border crossers into the U.S. interior and preventing about 9-in-10 deportations with “sanctuary country” orders that have resulted in a 70 percent drop in the number of criminal illegal aliens in federal custody and an 80 percent reduction in arrests of illegal aliens.

Since late January, totals provided to Breitbart News reveal that nearly 42,000 border crossers have been released into the U.S. by the Biden administration. This is a population four times that of Jackson Hole, Wyoming.

A DACA amnesty would put more U.S. citizen children of illegal aliens — commonly referred to as “anchor babies” — on federal welfare, as Breitbart News reported, while American taxpayers would be left potentially with a $26 billion bill.

Since DACA’s inception, more than 2,100 recipients of the program have been kicked off because they were found to either be criminals or gang members.