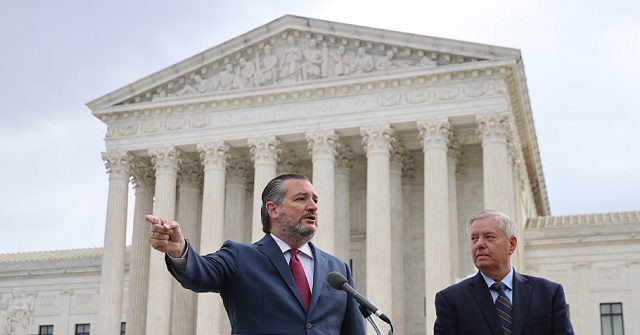 Republicans did not try to pack the Supreme Court when they controlled Washington, Sen. Ted Cruz (R-TX) said during a press conference on Thursday, contending Democrats are “trying to rig the game” because they know voters will not support their radical agenda.

“There’s a reason the Democrats don’t actually want to go to the voters and try to convince the voters to do this: Because the voters will tell them to jump in a lake,” Cruz said during a Thursday press conference alongside Sens. Marsha Blackburn (R-TN) and Lindsey Graham (R-SC).

“We could of,” he said, noting the left’s obsession with describing Trump as “some crazy autocrat.” Despite having total control in Washington, Republicans, he noted, made no such moves:

You didn’t see Republicans, when we had control of the Senate, try to rig the game. You didn’t see us try to pack the Court. There’s nothing that would have prevented Republicans from doing what they’re doing other than respect for the rule of law. Other than basic decency. Other than recognizing that democracy matters and packing the Court and tearing down the institutions that protect our rights is fundamentally wrong.

Packing the Supreme Court, as proposed by Democrats via the recently unveiled Judiciary Act of 2021, goes beyond business as usual, he added.

“What we shouldn’t be debating is a radical plan to destroy the United States Supreme Court, to destroy judicial independence, and to destroy the rights that are protected in the Bill of Rights. All of those are hanging in the balance,” he warned.

His remarks follow last week’s unveiling of the Judiciary Act of 2021, a proposal that would expand the Supreme Court from nine justices to 13.

“The Republicans stole two seats on the Supreme Court, and now it is up to us to repair that damage,” Sen. Ed Markey (D-MA) said last week, deeming democracy “in jeopardy” because “the Supreme Court’s standing is solely damaged.”

“And the way we repair it is straightforward,” he said, previewing the plan to add four Biden-appointed justices to the Court.

“These four new seats, to be filled by president Biden, will reconstitute the United States Supreme Court. The bench will then rightfully reflect the values of the majority of the American people on whose behalf they serve,” Markey added.

A Rasmussen Reports survey released this week shows a majority of voters oppose Supreme Court packing by a 22-point margin.