A guy on Bumble didn’t just strike out with a woman while trying to impress her — he got arrested for it, because his pickup line involved the Capitol riot … according to prosecutors.

According to legal docs … a man named Robert Chapman began chatting with a woman on Bumble a few days after the January 6 Capitol riots and told her, “I did storm the capitol,” adding … “I made it all the way into Statuary Hall!” 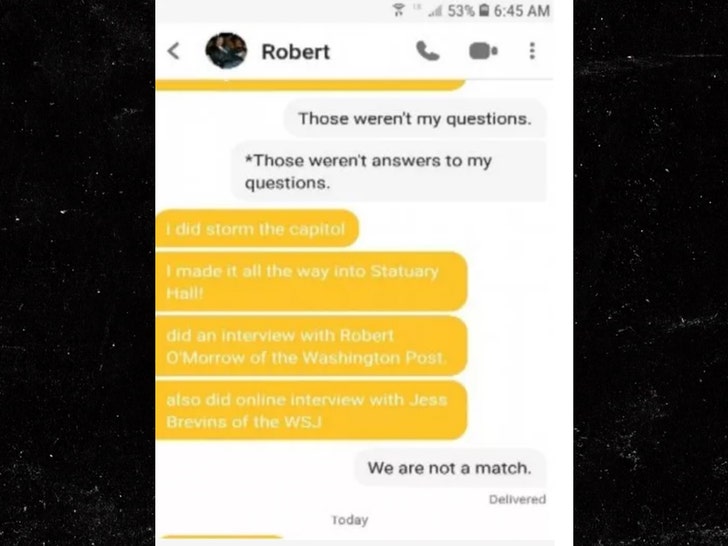 The feds say after he boasted a bit more about doing interviews with the media, the woman simply replied “We are not a match.” … and according to the docs, she turned him in by providing a screenshot of their convo to law enforcement.

Based on the tip — and some additional info about Chapman allegedly shared on Facebook — the authorities say they learned he goes by Robert Erick on social media, and they discovered several more potentially incriminating posts.

Prosecutors say in one FB post, Robert said he was leaving “the rotten apple” of NYC to head “down to the District of Criminality to Enjoy some much deserved Entertainment.”

A day later, the feds say he posted a photo of himself at the riots along with the caption, “I’M F**KIN INSIDE THE CRAPITOL!!!”

Chapman’s now been arrested and charged with trespassing and disorderly conduct on restricted government property. He is one of more than 370 people arrested for involvement in the Capitol riot — but he’s one of few who was nabbed through a dating app.