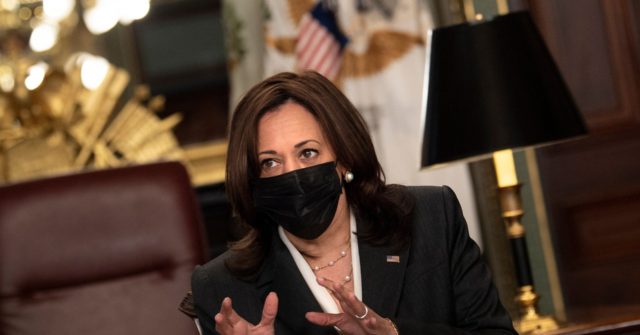 Vice President Kamala Harris used a meeting Thursday to argue climate change is a root cause of migration from Central American countries.

“We are looking at extensive storm damage because of extreme climate, we’re looking at drought,” Harris said.

Harris met with foundation leaders on the ongoing migrant crisis as people from Honduras, El Salvador, and Guatemala flood the Southern border through Mexico.

Because of the changing climate, Harris argued, people in the region faced a struggling agriculture industry, food scarcity, food insecurity, and extreme poverty.

“Again, we’re looking at the issue of climate resiliency, and then the concern about the lack of economic opportunity,” she said.

The Biden administration posits damage from Hurricanes Eta and Iota in 2020 devastated the region, a climate event that continues pushing climate migrants to the United States. In February, Biden signed an executive order for the Assistant to the President for National Security Affairs to draft a report on the impact of climate change on mass migration.

Harris repeated the challenges in the region were daunting, but she expressed her intention of offering people hope.

Harris cautioned the problem was “not going to be accomplished overnight.”

“If it was easy, it would have been solved a long time ago,” she said.