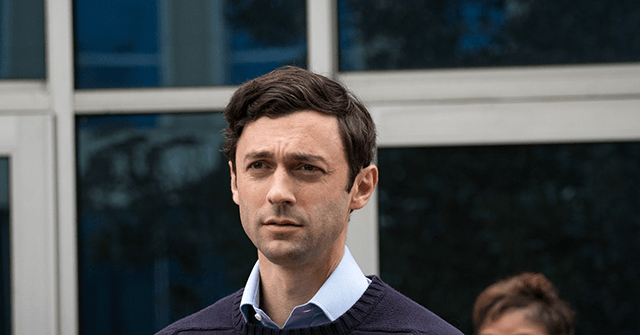 Sen. Jon Ossoff (D-GA) led 28 Senate Democrats on Sunday in calling for a ceasefire in the conflict between Palestinian Hamas terrorists and Israel, even though the Israeli military says that it needs more time to neutralize the threat posted by Hamas.

Ossoff ran for office touting his Jewish identity, giving an interview to the left-wing Israeli daily Ha’aretz in December titled, “Jon Ossoff Tells Haaretz How His Jewish Upbringing Taught Him to Fight for Justice.” He told interviewer Etan Nechin: “[M]y Jewish upbringing instilled in me a conviction to fight for the marginalized and oppressed, and also to be vigilant where there’s the risk that authoritarianism may emerge.”

He also defended fellow candidate, Rev. Raphael Warnock, against critics who pointed to Warnock’s history of anti-Israel comments. (Warnock, like Ossoff, went on to win his runoff election in January, handing both Georgia seats to the Democrats.)

But on Sunday, Ossoff led calls by left-wing Senate Democrats for Israel’s effective surrender to Hamas, pushing for a ceasefire while Israel was still being bombarded with hundreds of rockets, with Israeli civilians forced to flee to bomb shelters.

A Hamas spokesman declared Sunday that any ceasefire at this point would be on the terrorist group’s terms, not Israel’s.

Joel B. Pollak is Senior Editor-at-Large at Breitbart News and the host of Breitbart News Sunday on Sirius XM Patriot on Sunday evenings from 7 p.m. to 10 p.m. ET (4 p.m. to 7 p.m. PT). He is the author of the new e-book, The Zionist Conspiracy (and how to join it). His recent book, RED NOVEMBER, tells the story of the 2020 Democratic presidential primary from a conservative perspective. He is a winner of the 2018 Robert Novak Journalism Alumni Fellowship. Follow him on Twitter at @joelpollak.