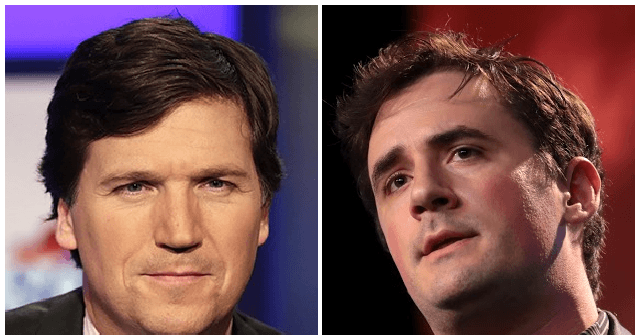 Breitbart News Editor-in-Chief Alex Marlow will discuss his bombshell investigative exposé, Breaking the News: Exposing the Establishment Media’s Hidden Deals and Secret Corruption, on the eve of its release during a primetime appearance with Fox News host Tucker Carlson on Monday at 8 p.m. Eastern on Tucker Carlson Tonight.

The book, which blows the lid off the deep-seated corruption of the establishment media and its connections to the radical left, is based on hard evidence, containing over 100 pages of source material and 1,206 endnotes.

“I spent a year conducting deep-dive research to unearth the stories the Establishment Media doesn’t want Americans to know,” Marlow said. “That’s why the book contains 1,206 endnotes totaling over 100 pages of source materials.”

Marlow explained that the establishment media seeks to erase rugged individualism in favor of artificial conformity to corporate priorities, drawing from his exposé during a Thursday appearance on the America First radio show with host Sebastian Gorka.

“I didn’t want to write just a memoir — and there’s a small amount of memoir in this — but for the vast majority of it is new information based off of deep dive research into our corporate media establishment. I think this will really resonate with you,” he explained. “The American media corporation is trying to stamp out the American individual — that concept of freedom, the rugged individualist — and trying to make us all corporate cogs who identify more with companies than with countries or ourselves.”

Carlson briefly mentioned the forthcoming investigative work during Marlow’s March appearance on Tucker Carlson Tonight, where the two discussed President Biden’s coronavirus speech and the fact that the commander-in-chief made no mention of government-ordered lockdowns.

“Alex Marlow, congratulations on the book, which I’m going to read,” Carlson said following the interview.