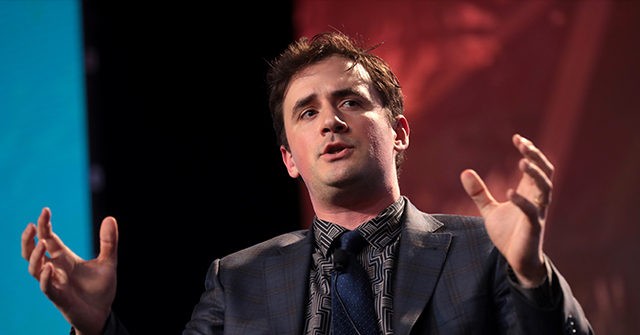 In his remarks on the news media’s attempts to manufacture obedience among Americans towards the business interests of their conglomerate ownership, Marlow drew on research in his forthcoming book, Breaking the News: Exposing the Establishment Media’s Hidden Deals and Secret Corruption.

Marlow stated, “I didn’t want to write just a memoir — and there’s a small amount of memoir in this — but for the vast majority of it is new information based off of deep dive research into our corporate media establishment. I think this will really resonate with you. The American media corporation is trying to stamp out the American individual — that concept of freedom, the rugged individualist — and trying to make us all corporate cogs who identify more with companies than with countries or ourselves.”

Marlow noted the news media’s campaign of political indoctrination is partly informed by its business ties to China and the ruling Chinese Communist Party (CCP), which seeks to undermine American values as part of its foreign policy.

“How much worse would the world be if we lost that concept of individuality?” Marlow considered. “That is the design of our American media class right now, and I think I prove it in the book, and that includes subservience to China.”

Breaking the News is slated for release on May 18.

“I didn’t want to write a book just to write a book,” Marlow stated, reflecting on his mentors and peers in news media. “I’ve been very blessed in my life to have a lot of great mentorship and experience, working with super cool people like you and Steve Bannon, Andrew Breitbart, Larry Elder — the original — and I’ve made such great friends with so many people like Charlie [Hurt] and Dennis [Prager].”