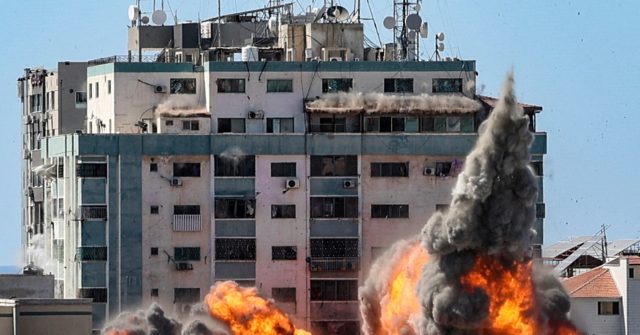 Aaron Klein, a senior adviser to Israeli Prime Minister Benjamin Netanyahu, wrote Monday that Palestinian Hamas terrorists must be condemned for deliberately using foreign journalists as human shields as opposed to Israel being criticized for targeting a terror complex disguised as an office building.

As Breitbart News reported, on Saturday elements of the Israel Defense Forces (IDF) destroyed the Jala Tower in Gaza, which also housed the Associated Press, Al Jazeera, and other international news outlets.

The IDF tweeted the building contained “Hamas military intelligence assets” and the media had been used as “human shields.”

Politicians and media representatives in the U.S. lined up to condemn the bombing, claiming the Israelis had endangered the lives of the journalists.

In an opinion piece published by the New York Post, Klein instead argued the terror tower “was used as a Hamas operations base for gathering intelligence for attacks against Israelis, researching and developing weapons and positioning equipment to hamper IDF operations.”

The IDF operation only commenced after civilians inside were warned about an impending strike and enough time was given for the occupants to evacuate, a point reinforced by Netanyahu:

Klein, who was the editor of Breitbart Jerusalem before leaving to join Netanyahu’s political team, contrasted this targeted, measured response by Israel to a terrorist threat in Gaza to Hamas firing over 2,900 terror rockets into Israel, while carrying out border attacks and instigating violent riots across the Jewish state, killing ten Israelis including two children.

This week’s case is far from the first time Hamas used journalists as human shields. During the 2014 Gaza War, Hamas was caught red-handed launching rockets 50 yards from a Gaza hotel known to be housing foreign journalists. The same rocket launcher was positioned about 100 yards from a United Nations building flying the UN flag outside.

Following the 2014 Gaza conflict, former AP reporter Matti Friedman wrote that Hamas’s use of journalists as human shields was a routine practice. ‘The AP staff in Gaza City would witness a rocket launch right beside their office, endangering reporters and other civilians nearby—and the AP wouldn’t report it, not even in AP articles about Israeli claims that Hamas was launching rockets from residential areas.’

He further argued Hamas “cannot be granted immunity from IDF strikes for their decision to embed their extensive terror apparatus in the same building as the Associated Press and Al-Jazeera. Yet the international condemnation wrongly aimed at Israel is providing Hamas with a victory.”

Ultimately such selective anger simply emboldens Hamas to further endanger journalists and other civilians by “strategically placing their murder machine inside civilian zones knowing that Israel will be criticized for defensive strikes against those sites,” Klein outlined, issuing a clear call for Israel to be backed in its right to defended its people and its borders:

If the international community wants to be helpful and lower the flames of violence they should strongly back Israel’s right to defend itself. At the very least, they should stop fueling Hamas’s terrorism and its use of human shields by criticizing a democracy for protecting its own people from a terror group actively waging war on Israeli civilians from buildings housing foreign reporters.

The current flare-up in hostilities between Israel and Hamas broke out last Monday when the militant group fired indiscriminate barrages of long-range rockets at Jerusalem and Tel Aviv, as Breitbart Jerusalem reported.

This came after Palestinians rioted across the Temple Mount on the last Friday of Ramadan, using the Al-Aqsa Mosque to stockpile rocks and fireworks that were used against Israeli police and civilians.

Israeli police responded by clearing out the mosque, and Palestinian terrorists used that to claim Israel had attacked the Islamic holy site.

Hamas fired hundreds of rockets at Israel on the following Monday evening, many of which were intercepted, though not all.

Two women were killed in the Israeli town of Ashkelon during that onslaught of terror. Israel responded with over 100 targeted attacks on terrorist targets in the Gaza Strip.