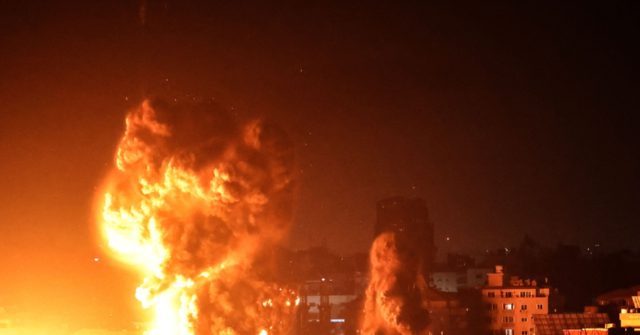 The Israeli military unleashed a series of precision airstrikes on the Gaza Strip early Monday morning, destroying nine miles of terrorist tunnels and the homes of Hamas commanders.

The latest attacks killed a local Gaza leader of the Islamic Jihad militant group, according to the Israeli military, which blamed him for some of the thousands of terror rocket attacks launched at Israel and now entering their second week.

That’s 9.3 miles that can no longer be used for terror.

AP reports Gaza’s mayor, Yahya Sarraj, told Al-Jazeera TV the strikes had caused extensive damage to roads and other infrastructure. “If the aggression continues we expect conditions to become worse,” he said.

“Senior Palestinian Islamic Jihad commander Hassam Abu-Arbid was killed in an Israeli airstrike in the northern Gaza Strip Monday afternoon as rockets fired from the blockaded enclave continued to be fired towards southern Israel communities,” the Jerusalem Post reported.

“The IDF said that Abu-Arbid, was killed in a joint operation with the Shin Bet intelligence services, commanded over the northern Gaza Strip brigade of the terror organization and was behind the launching of rockets and anti-tank guided missiles towards Israel.”

The IDF made the announcement on social media.

This is the moment we targeted Islamic Jihad Northern Division Commander in Gaza, Hussam Abu Harbid.

As an Islamic Jihad commander for 15 years, he was behind rocket launches, shootings, & anti-tank missile attacks on Israel.

He won’t be committing any more terrorist attacks. pic.twitter.com/hbwFsSjjq3

The IDF also struck a warehouse containing weapons that was located in the home of a Hamas terrorist and also targeted a naval weapons warehouse belonging to Hamas.

Residents of Gaza awakened by the overnight barrage described it as the heaviest since the war began, even more powerful than a wave of airstrikes in Gaza City the day before that left 42 dead and flattened three buildings.

That earlier attack was the deadliest in the current round of hostilities between Israel and Gaza’s Hamas rulers.

Israeli Prime Minister Benjamin Netanyahu said during an interview on Sunday, “We’re trying to degrade Hamas’ terrorist abilities and to degrade their will to do this again. So it’ll take some time. I hope it won’t take long, but it’s not immediate.”

AP contributed to this story