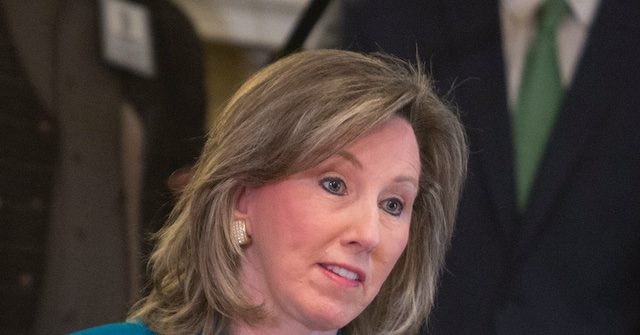 Anchor Nicolle Wallace said, “Barbara, why are there only two? Why it just Liz Cheney and Adam Kinzinger who see this the way you see it?”

Comstock said, “Like I said, 35 of the House members wanted an investigation. Seven senators supported it, So I do want to give more credit to all those folks. Here’s the thing, the information is going to come out. As I pointed out when I worked on the Clinton investigations, we got a lot of stonewalling. We got hundreds of people who took the Fifth or fled the country. But you know what? The truth came out. Now it dragged out and ran into the election, you may remember, that we worked on, and George Bush won. I don’t think it helped Al Gore that all of these things were dripping out through an election year.”

She continued, “I think as a Republican, it would be better for Republicans to engage in the truth-telling process, be out there in front, rip the band-aid off fast and get the information out. It’s going to come out through books, through media, through documents, you know, as time goes on. The longer you drag it out, the more it will run into the 2022 election cycle and the ’24. But more importantly for the American people, it keeps the danger alive.”

Comstock added, “I don’t think our democracy is fragile. I think it’s very strong. I think we had in those 61 cases, judges, a lot of conservative judges who just kicked Trump out of court and kicked him to the curb, and said the arguments were ridiculous. You saw Republicans in Georgia stand up and in Arizona. You know, Bill Barr and the deputy attorney general, those records are coming out that they said no to all of this and said there’s no fraud here. You had a lot of people in a lot of different places. I think the more subpoenas that we have out there for information, the more you will find that a lot of people said no to Donald Trump and stood up and protected this country. We need to know that, too, because there are probably are some unsung heroes, whether in the military or in Homeland. People who are maybe career officials who are not going out there in front of the cameras. But we need to know the stress they were put under, and we need to get that story out. If Republicans don’t do it now, it’s going to hurt them in a political way, as well as making this danger go on longer than it should.”

Wallace said, “I mean, Barbara, I guess the counter-argument to that is that it isn’t over. Raffensperger may have done heroic things in the context of the count of 2020, but he also facilitated a voter suppression law in that state that would have disempowered him and his office. I think it’s not black and white. I think the observation that our democracy is in peril is beyond dispute. You talked about the truth coming out. The Republicans aren’t even for the truth. They purged Liz Cheney for telling the truth from her leadership place. Are you really convinced they are interested in the truth?”

Comstock said, “I know it’s going to take a while. Margaret Chase Smith, she came out in 1950, she only had six supporters on her Declaration of Confidence going after Joe McCarthy, but four years later, 67 members of 9 Senate voted to censure Joe McCarthy. Then he was over. I would like to shorten that timeline. Four years was longer than it should have been, but I think, in the long run, the American people, the truth comes out, and our democracy usually rewards that. So I think a few people with courage, we already have them in the House and Senate, people who have stood up. Margaret Chase Smith only had six. We at least have seven in the Senate now. We 35 in the House, I think those few people with courage can make a majority of people. Particularly, as you see, Republicans are now very concerned that Trump is out there endorsing very weak candidates who could lose their seats. Now, I’d prefer to have better candidates that aren’t Trump endorsed that win, but if they lose, that will be another way they learn that are lessons.”

“I do think, you know, sooner rather than later, with the truth coming out, the scales will fall from the eyes, the way they did with Joe McCarthy, and this will be — either it’s cutting out the cancer or maybe, you know, more optimistically it’s just passing of the political kidney stone that’s painful, but we can all survive it,” Comstock continued. “I do think, or democracy was built to last. It’s lasted through tougher things than Donald Trump, who is two times impeached, failed guy, who is at 47%, and it’s going down every day, is not going to be the future of anything that will ever get to the White House. If we nominate him, yeah, that’s not good because then we lose. But he’s not going to be the future of anything, except failure and sore loser. Sore losers everywhere can rally around Donald Trump, but sore losers are still losers. ”