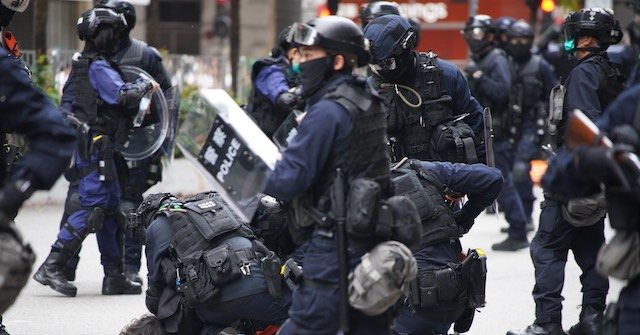 Students at a college in Nanjing, China, staged an unusually energetic protest on Sunday that began as a peaceful march against university merger plans and ended with riot police storming the campus after the principal was taken hostage for 30 hours.

The protest took place at Zhongbei College at Nanjing Normal University, where undergrad students objected to a cost-saving proposal that would merge their college with a Nanjing vocational school.

Students at several other independent colleges have staged similar protests against the merger plan because they feel fusing their universities with less-prestigious vocational schools would devalue their degrees, hindering their ability to find good positions in China’s highly competitive labor market. Student protesters said the merger plan would essentially defraud them by draining the value from diplomas they paid premium tuition fees to attend.

“It thoroughly deceives and conceals the truth from students. That’s why students spontaneously organized. Zhongbei College fees are really expensive, around 17,000 yuan a year … who would spend that much on a vocational college?” one student explained to AFP.

17,000 yuan works out to about $2700 U.S. dollars, which would be a bargain by the standards of American college tuition in 2021, but is a steep price in China given the median national income.

Some of the other campus protests have been feisty, but none went as far as the Zhongbei College protesters. At first, they simply marched outside the university entrance, waving banners and forming human chains, but then they decided not to allow principal Chang Qing to leave after he met with them to discuss their grievances.

The students defied warnings from the police to release Chang and continued holding him against his will after other university officials announced the merger proposal had been withdrawn.

Riot police stormed the campus on Tuesday, provoking a confrontation that eyewitnesses described as much larger and more violent than Chinese officials were willing to admit.

The city police department issued a statement that said “public security organs took necessary measures in accordance with the law to remove the trapped person,” meaning Principal Chang, and a few people who were lightly injured in the operation to “uphold campus order,” were “immediately sent to hospital for treatment.”

Photos circulating on social media showed police in riot gear using batons and pepper spray on students, with one woman bleeding from a head injury. One Beizhong student told Agence France-Presse that around 3,000 students and 400 police were involved in the clashes.

“We were not arrested. The school hired auxiliary police who injured, beat, pepper-sprayed, threatened and verbally abused students,” the student told AFP.

A video clip posted to Twitter showed dozens of police and security personnel shoving and yelling at students in a crowded school hall. Another showed thousands of chanting undergraduates surrounded by lines of officers on a sports ground, as police dragged some out of the crowd.

The Chinese Communist Party’s (CCP) vast army of censors swung into action to suppress videos of the confrontation, completely blocking the #NanjingNormalUniversityZhongbeiCollegeStudentsInjuredByViolentLawEnforcement hashtag on Weibo. Weibo is China’s equivalent of banned Twitter. Its users evidently have no problem with typing out very long hashtags.

RFA’s correspondents said that while strident public protests are rare in authoritarian China, the university merger issue is so huge that CCP officials decided a violent crackdown in Nanjing was the only way to keep the protest movement from spreading.

Mainland officials doubtless have nervous memories of the student protesters in Hong Kong, and of a few previous eruptions of popular discontent that grew beyond the CCP’s control, like the backlash against the vaccine scandals of 2018.