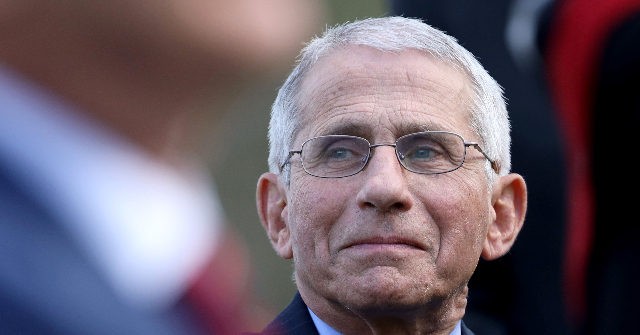 National Institute of Allergy and Infectious Diseases head Dr. Anthony Fauci said Wednesday on MSNBC’s “MTP Daily” that the Republican attacks on him are “painfully ridiculous” and attacks on “science and the truth.”

Anchor Chuck Todd said, “I want to get to the political attacks. You have become— you’ve been sort of become a character on the right. There is some really wild conspiracies. I got to play one because it’s a sitting United States Senator Marsha Blackburn. I think we have a sound of this. Let’s play that one.”

In a video, Blackburn said, “Here are some facts that I want you to know. First of all, yes, Dr. Fauci was emailing with Mark Zuckerberg from Facebook trying to create that narrative cherry-picking information so that you would only know what they wanted you to know, and there would be a narrative that would fit with this cherry-picked information.”

Todd said, “I don’t even know where to begin, but it’s a sitting United States Senator. The most extreme version of what I’ve heard. You have Kevin McCarthy doing his own version of this, Marco Rubio. You’re aware of the critiques. You’ve been debunking this. How do you debunk something like that? She’s got it in her own head, again, a United States Senator that represents the state of Tennessee. What do you say to that?

Todd said, “Neither did we.”

He continued, “He should be fired because he in the beginning changed his mind about masks. Well, okay. so let’s go back early on with the masks and let’s take a look at that. At the time that we were saying we shouldn’t be wearing a mask, there were three factors going on. A, there was thought to be a shortage of masks. B, there was no evidence that masks worked out side of the context of a hospital. I wear a mask when I’m seeing patients with respiratory disease that could be transmissible like Tuberculosis, a well-fitted N95. Thirdly, we were not aware of the extent of asymptomatic spread so we said you don’t really need to wear a mask. It wasn’t only me. I’m picked as the villain. It was the surgeon general of the United States and the entire CDC was saying the same thing.”

He added, “That issue with masks is people want to fire me or put me in jail for what I’ve done, namely, follow the science. I could go the next half an hour going through each and every point that they made. It’s preposterous, Chuck, totally preposterous.”

Fauci concluded, “It’s very dangerous, chuck, because a lot of what you’re seeing as attacks on me quite frankly are attacks on science because all of the things that I have spoken about consistently from the very beginning have been fundamentally based on science. Sometimes those things were inconvenient truths for people and there was push back against me so if you are trying to, you know, get at me as a public health official and scientist, you’re really attacking not only Dr. Anthony Fauci, you’re attacking science and anybody that looks at what is going on clearly sees that. You have to be asleep not to see that. That is what is going on, science and the truth are being attacked.”