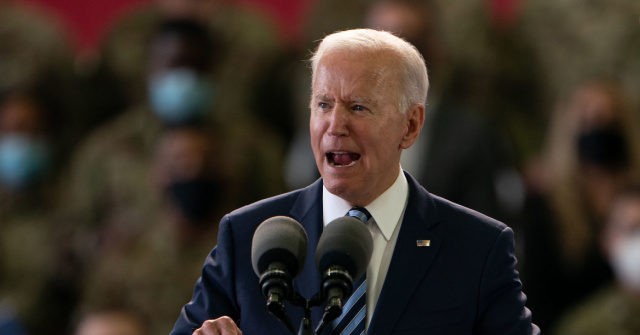 President Joe Biden claimed Wednesday that the greatest threat to America was global warming in a speech to American troops in the United Kingdom.

Biden asked the nations of the world to commit to “ambitious climate action” to stop climate change and stop the world from warming no more than 1.5 degrees celsius.

Biden claimed that when he was elected as vice president with President Barack Obama, the Joint Chiefs of Staff told them that global warming was the greatest threat to the United States.

The president spoke to American troops stationed at the Royal Air Force Mildenhall base prior to his meeting with world leaders at the G7 summit of world leaders in Cornwall.

Biden warned of “significant population movement” because of global warming, including “fights over land, millions of people leaving places because they’re literally sinking below the sea like in Indonesia because of the fights over land that is not there anymore.”

The idea of global warming presenting a significant threat to world stability was prioritized by Pentagon officials during the Obama administration in 2009.

Former Secretary of State John Kerry also repeated the warning to anyone who would listen.

Last week, Biden cited white supremacy as the “most lethal” threat to America in a speech recognizing the 100th anniversary of the race riots in Tulsa, Oklahoma.

“According to the intelligence community, terrorism from white supremacy is the most lethal threat to the homeland today,” Biden said. “Not ISIS. Not Al Qaeda. White supremacists.”